In Advance of Next Week’s Show at the Grog Shop, Guided by Voices Guitarist Talks About the Band’s ‘Arena Rock’ Approach to Its New Album 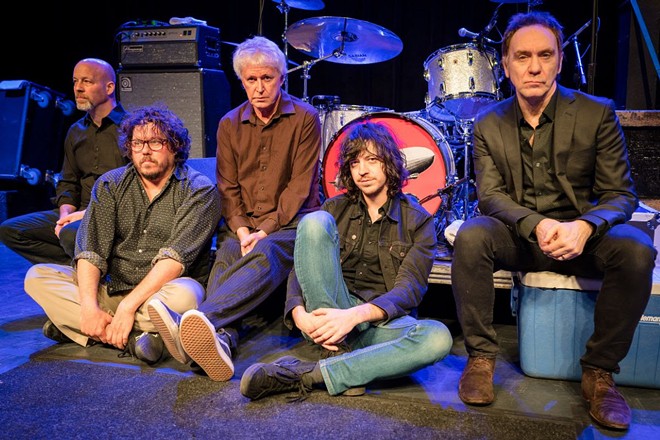 Tony Nelson
When the indie rock act Guided by Voices would come to Cleveland in the 1990s, either Cobra Verde or Gem, bands that featured local guitar hero Doug Gillard, would often open for the Dayton group.

A big fan of the band, Gillard would regularly jump up on stage with the guys to jam.

He and members of the local group Cobra Verde would formally back GBV on 1997’s exuberant Mag Earwhig! and the tour in support of the release.

“I was friends with that classic lineup, and Cobra Verde was excited to play with a band we loved and make that record and do that tour,” says Gillard, now a full-time member of GBV, via phone from his New York home. GBV performs at 9 p.m. on Friday, Nov. 29, at the Grog Shop in Cleveland Heights.

After Mag Earwhig!, Gillard would soldier on with the GBV guys as they signed to TVT Records and recorded 1999’s Do the Collapse and 2001’s Isolation Drills, terrific albums that nearly delivered the massive pop/rock hit that had always eluded the band.

“The band had been on Matador, but TVT had better distribution,” explains Gillard.

Gillard’s run with the group continued through to the band’s 2004 farewell tour, appropriately dubbed the Electrifying Conclusion Tour.

“That tour was great, and the last blowout was in Chicago, and there’s a DVD of that show,” Gillard says. “We knew the band was coming to an end, so we just had fun. I didn’t think the band would ever come back, and that was fine. I just wanted [singer] Bob [Pollard] to do what he wanted to do, and everyone thought we’d be moving on.”

Pollard would put classic lineup of the band back together in 2010 to play the Matador Records 21st anniversary celebration in Las Vegas. Gillard played the after parties for the warm up gigs the band played prior to the Vegas show.

The group toured and recorded until disbanding once again in 2014, only to reunite again in 2016 and issue Please Be Honest, an album Pollard recorded entirely on his own. Gillard returned to the fold in July of 2016.

“It was a trip to come back,” he admits. “I had to learn a few new songs, but I already knew a lot of songs. I had to learn the new album, which became August by Cake too. I was excited to come back to the band. At that time, things started to gel with all of us.”

For August by Cake, Pollard recorded five of the songs on his own before bringing the band together to complete the disc. Singer-guitarist Bobby Bare Jr., an alt-country artist of his own right, also joined the band for the first time in the studio for that album.

“It’s fun to record with Bobby [Bare Jr.],” says Gillard. “He even wrote a couple of songs. He’s fun to tour with too.”

Pollard wanted each member to write at least two songs for August by Cake, the band’s first double-disc. The riveting Who-like “5° on the Inside” opens the 32-song album with a bang as Pollard then continues to exploits his British Invasion obsession with songs such as “Fever Pitch” and “What Begins on New Year’s Day.”

Since the release of that album, the band’s been plenty busy, having released How Do You Spell Heaven in 2017 and Space Gun in 2018. This year alone, the group has issued Zeppelin Over China, Warp and Woof and Sweating the Plague.

“We try to make the records a little different from each other, and we try to experiment in the studio as much as we can within reason and bring something unique to every song,” says Gillard. “We have to compartmentalize in our mind learning songs for a new record that's not out yet and learning to play the songs from the record that’s just been released.”

“Travis is our front of the house sound guy when we play live, so it’s very comfortable to work with him, and we’re all working toward the same thing,” says Gillard. “It’s convenient for the three of us in the New York area, and we have fun doing it as well. Travis has an efficient way of working. We try not to waste too much time in the studio.”

Sweating the Plague songs such as “Downer” and “Tiger Top” sound particularly heavy and eschew the band’s British Invasion tendencies for something a little harder. "Sons of the Beard," the album's final track, has a majestic, Emerson, Lake and Palmer feel to it.

“One of Bob [Pollard]’s notes for the album was that he wanted the feel of arena rock,” says Gillard. “His way of defining that term comes from the late ’60s and early ’70s. He saw Kiss live the first time they came to Dayton in 1974, and he saw UFO early on and AC/DC early on. It’s not like stadium rock but the dry album-oriented rock. I would put Blue Oyster Cult in that category too. I grew up on WMMS and all of that was ingrained in my mind too. There’s some post-punk and prog as well.”

For Gillard, who started wanting to play guitar at a young age simply because music was always on at his home and in the car, touring and recording incessantly with GBV has been a dream come true.

“My dad was musical and played guitar as a hobby,” he says. “I just gravitated to music. I can’t pinpoint a single thing, but I grew up loving and watching the Monkees and the Archies, and my sister had the Beatles and Paul Revere and the Raiders albums. Every since I can remember, I’ve been banging on stuff and trying to play music.”

Outside of GBV, he’s been plenty busy too. He plays on the forthcoming album from indie rock veterans Nada Surf and has produced an album by the Oakland, CA-based indie rock act Bye Bye Blackbirds. He’s also been collaborating with Clevelander Matthew Wascovich on a variety of projects and is still active in the Beatles tribute act Bambi Kino. He plays on a few tracks on the latest effort from the Cleveland band Metrolight, and he can be heard on the recent reissue of the Pollard solo album, Speak Kindly Of Your Volunteer Fire Department.

“Just knowing there’s always new configurations of chord and always room to do something different keeps me inspired,” he says. The possibilities are always kind of endless when you pick up a guitar or keyboard to make a song. I’m always inspired by that.”