In Advance of Next Week's Show at the Grog Shop, Jewish Rapper Kosha Dillz Talks About How Hip-Hop Saved His Life 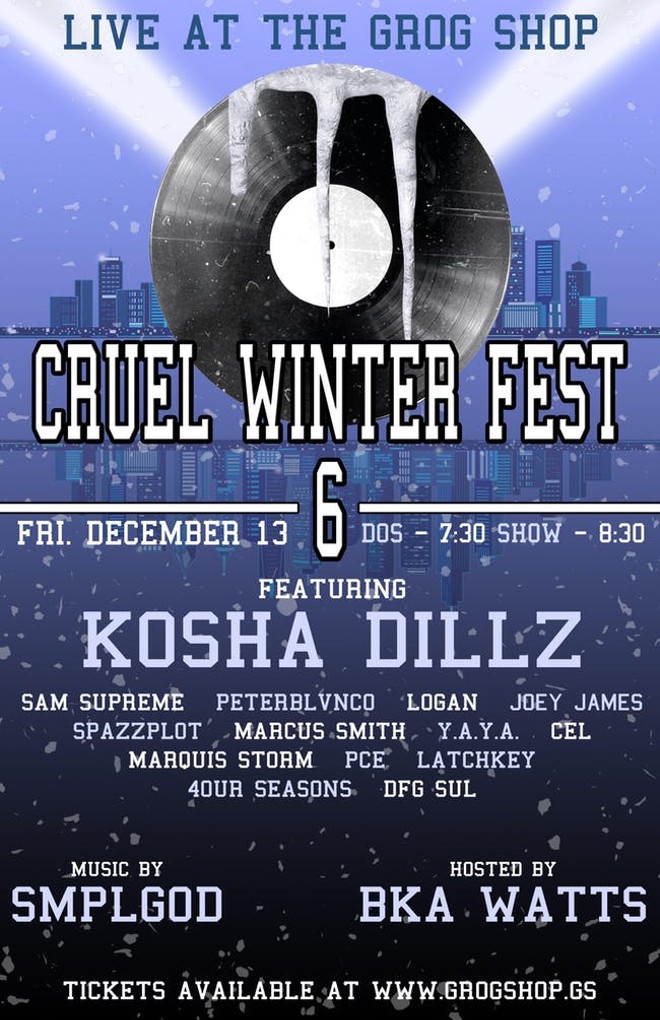 In hip-hop, the idea of the Jewish emcee isn't a new concept. One of the most prolific hip-hop groups in rap history — Beastie Boys featured three of Jewish MCs. Other Jewish hip-hop artists include 3rd Bass' MC Serch, El-P of Run the Jewels, producer Alchemist, the recently-departed Mac Miller and even Spotify's most streamed artist of the decade, Drake.

Born in New Jersey to immigrant Israeli parents, Rami Even-Esh is another in a long line of notable Jewish emcees. He came up in the freestyle battle rap circuit and even competed at the famed Nuyorican Poets Cafe in New York City. Even-Esh was going by the moniker KD Flow at the time — a derivative of the Kosher Dill name he was previously using. Even-Esh was also an accomplished wrestler, but both drug dealing and addiction would derail that. In 2005, after two stints in jail for selling drugs, Even-Esh, now once again with a sense of pride in his heritage and going by Kosha Dillz, released his first music.

His first album, Beverly Dillz, would follow in 2009. Hip-hop has taken him all over the world, and the rapper has been known to travel across seas to perform for just minutes. His latest journey has taken him to Israel.

"I am actually living here," Kosha Dillz says via email exchange. "I left America and immigrated to Israel. Imagine leaving everything you know for something that is way different and better and also uncomfortable and scary. I think of it as swimming in the deep end or far out in the ocean. Once you are out there it isn’t as scary as it once felt like."

Dillz feels as if the journey has been able to bring him even closer to his parents.

"I mean it is interesting since this is where my parents grew up," he says. "Now I am growing up in a different way. Reverse growth and tracing roots. This journey is more spiritual."

Dillz, a student of the game since a young age, largely credits underground and east coast hip-hop as his major influences.

"Boot Camp Click and Duck Down Decords and Wu-Tang and Company Flow and Digital Underground," he says. "And Tupac and Notorious BIG."

He also counts Columbus emcees Copywrite and the late Camo Tau as sources of inspiration.

Kosha Dillz was a standout on his wrestling team at Rutgers, but eventually drugs would take ahold and rob him of his freedom. He would spend both his 18th and 21st birthdays behind bars. In 2005, Even-Esh would finally get clean for good. He even gave a TED-talk on the subject of how freestyle rap saved his life.

"Getting sober was a thing I did," he says. "I was going to go to prison for a long time and someone said if you do rehab and programs you won’t have to go."

As Dillz's career moved forward, he saw himself touring across the world, having his music in ads and even being a playable character in video games like NBA 2K.

"Super Bowl commercials [Bud Light] and award-winning albums," he replies when asked to point out some of the highlights in his career thus far. "[Also] Playing stages with Matisyahu around the globe, being with my friends in vans in parking lots and playing Vans Warped Tour everyday for multiple summers."

One of his fondest memories is bringing his parents onto stage with him. "I'll always love that," he says of the moment.

Although Kosha Dillz has worked with the likes of Snoop Dogg, Ghostface Killah and countless others. There are a few collaborations he'd like to see come to fruition.

"I’d like to work with Kid Cudi," he says. "He's one of my favorites and a big inspiration for my rap style and singing. I also wanna work with Mod Sun. But then, I’d also wanna cut a few records with Robert Glasper and Of course, Kanye!"

The Passover Seder is the retelling of the story of the liberation of the Israelites from slavery in ancient Egypt. Dillz held a Passover Seder at this year's Coachella festival. This was a great help for anyone who had to choose between spending time with their family and learning about their heritage.

"I make them happen because I don’t think we should skip a festival or great event so let’s bring it to the festival," he says. "Let’s be the Jewish voice where there are none."

Next on the horizon for Dillz is releasing his album Nobody Cares Except You and finding his wife. The single by the same name is already available on Spotify and doing well.

Kosha Dillz will headline Cruel Winter Fest 6. The event takes place at 8:30 p.m. on Friday, Dec. 13, at the Grog Shop in Cleveland Heights. Sam Supreme of FreshProduce, Peter Blvnco, Cel and others are slated to perform as well. The show will be hosted by BKA Watts.

"Very interactive and aggressive," Dillz says of his stage show. When performing his song "Span-Hebrish," he gives his audiences a lesson in Hebrew. "I have come from afar, so I want you to come close. Let’s get comfortable being uncomfortable, then let’s get lost and come back to it."