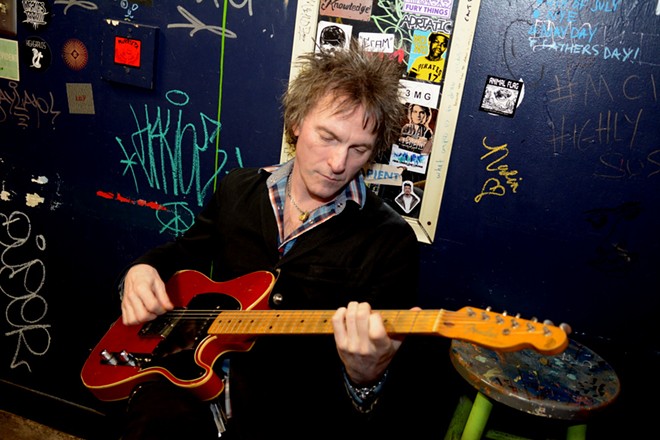 Courtesy of Dina Morales
Tommy Stinson
The Lemonheads and the Replacements both came out of the 1980s alternative rock scenes and left lasting impressions for the way they mixed punk with pop and rock.

While the Replacements have disbanded, bassist Tommy Stinson continues to tour and record. He comes to the Grog Shop on May 6 to open for the Lemonheads. And even though the Lemonheads lineup has shifted over the years, singer-guitarist Evan Dando still fronts the band as he did in the early days. The group just issued Varshons 2, an eclectic album of cover tunes, earlier this year.

In separate phone interviews, the two talk about their respective careers.

Michel van Collenburg
Evan Dando
Talk about how you guys know each other?
Dando: I’ve always been a big Replacements fan. I’ve seen them play tons of times. My manager has done some work with them and put us together, so we could do this tour together. I’ve met Tommy out in Kingston where he lives in New York. I’m really looking forward to it.
Stinson: We share a manager, but I’ve crossed paths with him over the years. We’ve been forever in a day trying to get together and put our noggins together and write some music, but it hasn’t come to pass yet. Maybe this bus trip on this tour will do it.

How will the two sets complement each other?
Dando: It will be really fun. We might do some songs together. We’ve done that before out in Kingston. It will work out well. I really like his songs. He’s a really great guy.
Stinson: I don’t know exactly. I haven’t even thought about it. I haven’t given much thought to what I’m going to play yet. I’m leaving it up to magic, or lack thereof.

What kind of music originally inspired you when you were growing up?
Dando: Starting in 1983, our friend Patrick Amory, who worked at Matador Records for years and years, went punk. We all went along with him. He went to our high school but was a year or two above us. We all started to going to the all-ages shows to see Flipper and the Minutemen. We got introduced to a great bunch of music that was all underground. He worked at Harvard radio too. Back then, he had a show called “The Record Hospital.” There was a rebirth of punk in 1986, and we all got back into it.
Stinson: That’s a bit of a tricky one. I grew up with all this shit that my brother was listening to in the ’70s, all the prog rock and mainstream FM rock and that kind of crap. In my teen years, I got hip to the Clash and the Pistols and things like that. It was then off and running in that direction.

The Lemonheads emerged from Boston at a time when the city’s music scene was thriving, and the Replacements came out of Minneapolis when that city’s music scene was thriving. Talk about what it was like to have been part of those scenes.
Dando: It was incredible. We played our second gig ever with the Pixies. What’s wrong with this picture? They were incredible. We saw them a bunch of times before they got big and that was a big treat for us. When I was in Blake Babies, we shared a practice space with them and that was really fun.
Stinson: You know, it was interesting. It was a cool music community all said and done. Everyone hung out together and played shows together and this and that. It was kind of diverse. Minneapolis had from Prince to Husker Du and us and everything in between. There were a lot of creative and like-minded misfits there at that time.

What it was like to see the band become commercially successful?
Dando: We never thought we’d be anything. That happened to all of our friends. Two thousand people started coming to our shows, and we got major label deals. It just happened to everyone. It was surprising.
Stinson: You know, we didn’t become commercially successful. We became cultishly successful. We’ve always skirted the perimeter of that. We couldn’t play that game to further our career. [Maybe we could’ve been successful] if someone had told us how to do it or if there was a way to keep your dignity and do it. Then, we might have looked for a fucking loophole. But for all practical purposes, we couldn’t really do it.

Did you have a surreal moment of realizing just how popular the group had become?
Dando: It was incredibly lucky the whole time. It took a lot of years to get there, and that was good. It was a gradual thing for us that happened over five years. Then, it was easier and easier and seemed like shooting fish in a barrel. It was fun to see bands like Sebadoh and Superchunk sell out [the Boston club] the Channel.

Evan, can you talk about the new album. What was your approach with it?
Dando: I just needed to put something out and wasn’t quite down with my own record. It was no big deal. It’s just something that was fun that we could tour on. It’s not apparent that the label put the artists who originally wrote the songs on it, but I think because it’s called Varshons 2 people would know it’s a covers album. This one is a lot of favorite songs along with one weird one that my girlfriend wanted to do, which is “Take It Easy.” I wanted to try them a little differently. With the GiveGoods’ song “Unfamiliar.” We just thought we would soup it up a little more and give it a dub sound. We had never done a reggae song.

Tommy, Bash & Pop put out a terrific album two years ago. What do you currently have in the works?
Stinson: That record became a Bash & Pop record because I recorded it a particular way. I did solo records that were me playing everything and piecemealing the records together between tours. I like those records, but there was always something missing. It was the band vibe that I missed. When I did the first Bash & Pop record, I wanted to do that. You go into the studio and play the songs live. We didn’t toil with things like that until we had a budget. That might have been when the biggest change came for the Replacements and could monkey around in the studio. Some things work and some don’t. I didn’t want to overthink. I didn’t want to sit and toil. I just wanted to have some people play the songs with me, so I could do my bit. It’s more of a band vibe. It didn’t feel like a Tommy Stinson solo record. I’m currently finishing up a Cowboys in the Campfire record. It’s me and my buddy Chip. He plays lap steel. It started as a dare years ago. We finally took it to the road when we had nothing to do one summer. We have a record and will put that out and then I’ll start making a Bash & Pop record and get out and tour behind them.

What’s kept you going all these years?
Dando: Just the love of music. I love playing guitar. I think I’m better at playing too, but it may be an illusion. I keep going against the odds. I’m hard wired for endurance. The current lineup is really good. The bassist is an old buddy of mine and guitarist Chris Brokaw, is someone whom I’ve been playing with from 2000. The drummer is new, but he worked out great when we went to Europe.
Stinson: I don’t know. I still like playing live. I don’t like to pound the pavement, but I like to do it on my own terms and I like to do it when it’s something worth doing. I want to spread myself out a little bit with producing bands and playing shows. There’s enough people who know who I am. I am working my way towards retirement and working it out so I can continue to do what I do in my small way and still have fun with it. I woke up with this morning with a song in my head. I’m working on it now. That’s always going to be there. I’m trying to do anything I can nurture the beast and still enjoy it without killing myself.