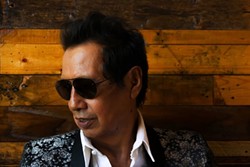 Nancy Rankin Escovedo
Alejandro Escovedo
A veteran singer-songwriter who's performed in various punk, rock and alt-country outfits since the '70s, Alejandro Escovedo moved to Austin in the '80s and began to draw from the city's rich heritage of blues and roots rock.

On his latest solo effort, last year's Burn Something Beautiful, he teams up with former R.E.M. guitarist Peter Buck and Young Fresh Fellows and Minus 5 founder Scott McCaughey. The hard rocking songs range from the ornery, guitar-driven "Heartbeat Smile" to the mid-tempo ballad "Suit of Lights."

Singer-guitarist Joe Ely has an even longer legacy. Back in 1970, he formed the Flatlanders with fellow Lubbock musicians Jimmie Dale Gilmore and Butch Hancock and then began a solo career in the late 1970s. His latest album, 2015's Panhandle Rambler, features narrative-based Tex-mex and roots rock songs that reference Lubbock, the Texas town where he grew up.

On Tuesday, Aug. 22, at the Music Box Supper Club, the two musicians will team up for a special co-headlining show. In separate phone interviews, they both talked about their rich pasts and their approach to the unique show which will find them playing songs off the cuff.

Lance Cowan Media
Joe Ely
How do you two know each other?
Escovedo: When I first got to Austin, of course, Joe was one of the reigning musicians there. I got to know him through my band Rank and File, and we opened up a lot for him. That began a relationship. We would run into each other over the years since we were living in the same town. Three or four years ago, we started doing these solo shows together, which was an incredible thing for me. I should backtrack a little bit and say that in the early ’90s, I think Joe used to do more solo shows. I could be wrong about the timing. But I would open for him when he did those shows, and I spent a lot of time studying what he was doing as a solo artist. He’s a great example of how to put on a solo show.

Ely: it goes all the way back to the late ’70s and early ’90s. Our band was playing quite a bit in the late ’70s and early '80s in Austin and in Southern California. There was a connection between Austin and L.A. with the rockabilly stuff. My band came from West Texas and the honkytonk world and Alejandro was more in the rock world. We were playing the same clubs, like the Whiskey and the Roxy and the Palomino Club. We did the Troubadour and Club Lingerie sometimes too. There was this small little scene that was going on but we had connections to it with the different bands and the records we made. We just followed each other. That went up to the present. We did some tours together. We did a great tour of Italy that was a lot of fun. We had this colorful Italian promoter who was always lost but wouldn’t admit it. This one time, he says, “I’m not lost. I just don’t know where I am.” We said, “Please stop at this café and ask for directions.” He went in and asked for directions and came back out and said, “Yes, they tell me where to go, but I don’t believe them.” He then goes in the opposite direction. The whole tour was like that.

Can you compare and contrast your music a bit?
Escovedo: From my end, I come from a more garage and punk rock background. His is more country and songwriter influenced. Don’t forget that Joe toured with the Clash and was very close to [the Clash's] Joe Strummer. He has that type of energy that we in punk rock or roots music were looking for. He represented that and fit into that philosophy of punk rock and what it was. He had the attitude and the willingness to take chances and stand on his own. It’s the same with Johnny Cash, Waylon Jennings and George Jones.

Ely: I grew up in Lubbock, Texas, so I was surrounded by music. Buddy Holly died the same year I came from Amarillo to Lubbock in 1959. My first bands were rock ’n’ roll and rockabilly bands. In the '70s, I met my friends Butch and Jimmy who were great songwriters. They led me in the direction of ballads and stories in song. That’s where I started recording myself with the Flatlanders. The whole idea of a story in a song was intriguing to both me and Al when we first got our bands together. A lot of bands were just singing “Twist and Shout” without much meat on the bones. That’s the attraction. Both of us write songs would have an inner story. That’s why it’s so refreshing when we can play some shows together. It puts everything in a good place.

How do the two of you perform together when you’re on stage?
Escovedo: We sit on stage together, and there’s no prepared set list. We just play songs and bounce stories off each other. In the past, it’s gone so well that before you know it, an hour and a half or two hours has gone by. We feed off each other and inspire each other to set each other up with stories that set up the songs. A song by one of us might inspire a song from the other person.

Ely: I sometimes have a list of songs I want to play, but they’re not in any order. We leave it open because one song might inspire a different song to come after it so if there was a setlist it would be too rigid. It’s necessary to have a setlist with a band, but if you’re just playing songs back and forth, it’s kind of harmful.

Can you play anything from your catalog?
Escovedo: No. There’s so many songs now, and I’m sure that’s true for him. Songwriters tend to be working on stuff all the time. As much as I want to play everything I’ve ever written, that’s not possible. A lot of the songs were arranged with strings and different type of instruments. That doesn’t necessarily lend itself to the solo show.

Ely: Pretty much. I can play anything that I can remember. I figured out one time that I could only keep 500 songs in my head at one time. If I added another one, I’d have to kick one out. I got about that many songs that I can play. That changes all the time.

How does Texas influence your music?
Escovedo: it was the first place I ever sang in public. It was the first place I ever really wrote a song. When we got there, it was very much a songwriters’ town. The influence of the city and the songwriters that came from that era are without question an influence. It’s part of who I am now. The past influences who I am today. In those days, I was learning how to be a songwriter and being in great bands alongside other great musicians and songwriters. That makes me feel a part of that era. I identify with it and draw from it all the time.

Ely: Well, you know, I’ve always lived in Texas and traveled all over. I was born and grew up in the cotton fields. All the things I was surrounded by have influenced my songs. My dad had a used clothing store and sold work clothes to the Mexican workers who came up in the ’50s and ’60s. With them coming up into Texas to pick cotton, they brought their musical instruments and carried with them the songs they shared in common. My daddy taught me Spanish. Outside on the streets were accordions and horn sections. There was this music everywhere. That followed me my whole life. It put an indelible mark on my music and the stories that came out of it. Now, [Trump is] trying to build a wall, which is the most ridiculous thing that could ever happen. I’ve been doing a lot of wall songs lately. One is called “Borderless Love.”

Talk about your latest album.
Escovedo: I’ve known the guys I collaborated with on my record for a long time. Scott McCaughey is one of the great unsung musical heroes of our time and Peter Buck without question is one of the most influential guitarists in this modern rock era. To work with them is an honor. When the opportunity came up and we played and got along really well, we decided to do it. We just had a show in California together, and it was amazing. I’m heading to Portland to write another album with them.

Ely: My latest album, Panhandler Rambler, was taking stories that I had started and some didn’t even have a melody or anything. They were stories I had sketched out. I realized that I had done different kinds of records but hadn’t focused on the stories that I remember as a kid. I went through them and picked out a set and got people into record them and finish them. They’re rough and tumble songs about trying to make a living in a desolate part of the country. They have references to the cartels and all the dangers that are coming up. For me, growing up the border was a place to set yourself free. When we were teenagers, we used to sit in with the bands down there. They would play 12 hours a day and would love to have some relief. We would sit in with the Mexican bands and have a great time. We could drink under age, which was great. It was a place we could go to have a whole different frame of mind.

What keeps you going after all these years?
Escovedo: Things like collaborations with Chuck Prophet or Tony Visconti or with an Italian band I play with in Europe. I’m going to record with them, and that will be a concept record about immigration. John Parish, who's worked with PJ Harvey, will produce the record. There are always new ideas and new ways to approach music. I’m not in the position to make 360-degree turns. I’m not going to make a jazz record, though I like using jazz musicians within my songs. It’s always interesting to play with other musicians. I don’t have one band. I play with whatever fits the situation I’m in.

Ely: There’s something about just keeping in touch with my life and the way I’ve lived it. I hear stories and get together with musicians I’ve played with. We just did a benefit for a guy who played accordion with me with the Flatlanders in the '70s and '80s. He needed some medical help and all the musicians he used to play with got together and did a benefit at Antone’s, Austin’s blues spot. We always played there and all the bands that ever played there showed up the other night, including guys I hadn’t seen forever, and I thought about how lucky I was to have traveled with so many great players and still kept my family together. There are lots of things you have to do in order to keep everything rolling smoothly. I just feel lucky I’ve been able to play music all my life.