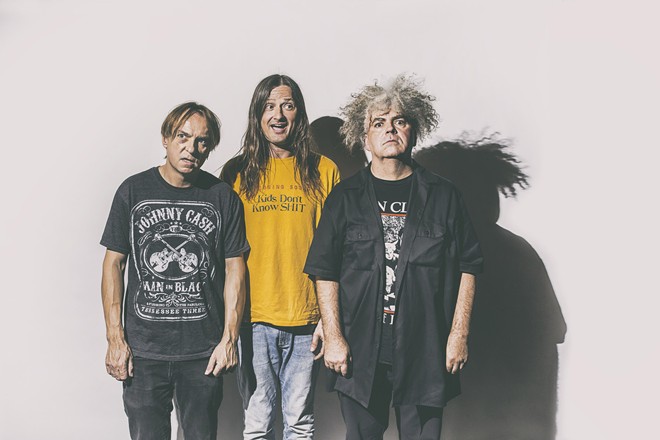 Chris Casella
Melvins.
Veteran grunge/doom rockers the Melvins are known as relentless road warriors who are constantly touring. That wasn't always the case, however. Singer-guitarist Buzz Osborne originally declared the band would never tour again after it hit the road shortly after forming in the 1980s.

“We came back from our first tour in the summer of 1986, and we vowed to never tour again,” says Osborne via phone. The Melvins perform on Sunday, Sept. 25, at the Grog Shop as part of the Grog Shop’s 30th Anniversary Celebration. “We were met by a bunch of dangerous and highly aggressive skinheads who liked long-haired music. I didn’t want anything to do with those people. We didn’t tour again for probably four years. The skinhead thing irritated me. I thought that if that’s what those people like, I have to do the exact opposite. Five years later, all those same people had long hair and were wearing Sub Pop shirts. Whatever way the wind blows. That didn’t make me any happier about them.”

In the wake of that first jaunt, the Melvins have remained a rock 'n' roll juggernaut. Just last year, the band released two new albums, Five Legged Dog and Working With God. The group recorded the LPs during the downtime caused by the pandemic.

“Two years off — we didn’t take it off,” says Osborne when asked about how the guys made it through the pandemic. “We did a lot of recording and did three Melvins TV online streaming shows. We did interviews and live stuff. I put together a photo book that’s just coming out now. We did a whole bunch of stuff like that, but [not being able to tour] wasn’t good. I don’t know if it’s the kind of thing I’ll get over. As time goes on, I wonder if people will come to the realization that the whole thing was just a waste of time. Maybe. I don’t know. I tried to do everything suggested. I just don’t know if it did any good. I’ve got limited amount of time in my life that I can work at the level I want to. I’m kind of a workaholic, but there are worse things to be addicted to than work.”

Osborne is happy that the Grog Shop survived the shutdown. He says the band has always enjoyed performing at the Cleveland Heights club.

“I like Cleveland in general,” Osborne says. “I’ve been in California since 1986 or 1987, and I’m not a fan of the winter weather [in Cleveland]. I could do without it as far as that’s concerned. We did a tour this year with Ministry [that came through Cleveland], and it was a rough go of it. There was snow, and it was cold. I just thought, ‘I’m not cut out for this crap.’ I don’t miss it. I’m of the philosophy that even birds fly south for the winter.”

At the beginning of the pandemic, Osborne released a solo acoustic album with bassist Trevor Dunn. While Osborne’s tour in support of that album was cancelled, he enjoyed the process of making a stripped down release and thought an album of acoustic Melvins tunes would be a fun endeavor.

“I had acoustic [music] on the brain at that point,” he says. “We weren’t sure what the capacity for touring would be once this thing is done. We thought maybe we would only be able to do an acoustic tour. We thought if we did something like [an acoustic album], we would have something we could sell that would make sense. If we needed to do an acoustic tour, then it wouldn’t be dumb. Once we got into it, one record seemed like it was not enough. We’ve done double albums, so we thought we’d do that. When we got to three sides, we thought we might was well do four. That was the thought process that went into it. It wasn’t much more than that. Anything that is worth doing is worth overdoing.”

The album commences with “Edgar the Elephant,” a psychedelic-pop song with heavy drums and soft vocals that proves the Melvins can sound ominous and foreboding even while unplugged.

“It’s an odd one,” says Osborne when asked about the tune. “It’s on one of our newer records. I worked hard on the odd nature of it, and it has odd chords and a weird structure. I did that guitar solo first. I was really happy with the chord structure I had. It’s an odd tuning as well. Most of it is just my own design. I just figure it out. I don’t read music.”

The other album the band put out last year, Working with God, features an approximation of the original Melvins lineup from 1983. It’s a much more typical Melvins album in that it includes irreverent takes on classic pop tracks such as the Beach Boys tune “I Get Around.” The Melvins recast the song as “I Fuck Around.”

“We had been messing around with that song in soundcheck just for a laugh,” says Osborne when asked about the tune. “I thought people would think it was funnier, but nobody really cares. But whatever. You can’t help that.”

With so many songs in its catalog, the Melvins have a smorgasbord of material at their disposal for their live shows. Osborne jokingly likens the live performance to “a Broadway musical.”

“It’s what works best together,” he says. “You go through it and figure out the songs that lay out best and take it from there. I prefer that. Some people complain that we play the same set each night. We do that for each tour. They think that’s boring. I will tell you what’s boring. It’s a band that picks the wrong set. You think this is boring? Wait to what happens if we picked out the wrong set for you. There’s no accounting for taste. If you don’t want what we’re doing, there are plenty of bands that will give you whatever it is you like. Just don’t expect us to do it. We’re here to offer you something you will enjoy or not enjoy. I don’t worry too much over that. In the end, it’s a war of attrition. I’m prepared to do my best while everyone else does their worst. That’s it.”