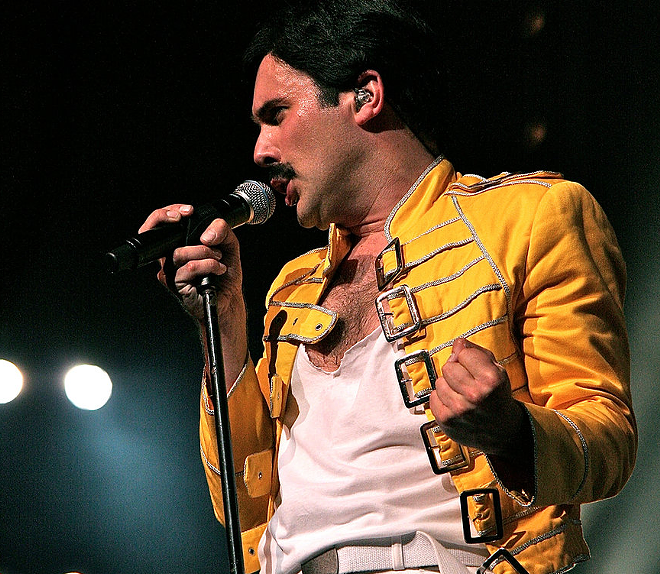 Chipster PR
Killer Queen's Patrick Myers.
One of the world’s best Queen tribute bands, England’s Killer Queen, arrives in the States next month for a U.S. tour. As part of that trek, the group performs on Friday, April 8, at MGM Northfield Park — Center Stage. Led by singer Patrick Myers, who takes on the role of flamboyant singer Freddie Mercury, Killer Queen has paid tribute to the British rock group for close to 30 years now.

In a recent transatlantic phone call, Myers said he was “massively” excited about the upcoming shows in the States, which would represent the band’s first gigs outside the UK in two years.

Talk about your musical background. What kind of music did you listen to while growing up?
Uh, I grew up in a house where there wasn’t a lot of music in it. I felt like an archaeologist. Going through my mom’s not-very-substantial record collection, I discovered the Beatles early. I became a big fan of them, but since I studied classical guitar growing up, and I constantly got those type of albums as birthday and Christmas presents. I was like, “Can you ease up?” When I was about 13 or 14, I realized the Beatles were finished and no longer an active band. I literally asked this question, “Who is there? Is there someone who does songs that are really brilliant, and they’re still going?” At the time, Queen was still going. We were on a school trip and going to Germany. My friend said, “I know who you are going to love.” He put these headphones on me. I very rarely listened to anything in stereo. But he put Greatest Hits 1 by Queen on. I went “This is out of this world. This is extraordinary.”

What was the first Killer Queen show in 1993 like?
Amazing but terrifying. We were thrown on stage as a last-minute replacement. We were playing a huge summer ball that typically had bands like Oasis or Blur or Pulp. Because they messed up, they didn’t have their entertainment license. It hadn’t been renewed that year by sheer oversight. The only thing they could put on stage was a student band. For this one year, it had to be a student band. Someone let the people working there know that there was “this one guy working on a Queen tribute.” They gave them my photograph, and they said, “Can they play?” I said, “I’m not sure we can.” They wanted us to do this huge show, and I knew if I didn’t take this one opportunity, that ship would pass by.

How difficult was it to learn to mimic the great Freddie Mercury?
It’s something you refine over the years. I had a version when I started because I was still a kid. When we got a lot of success, I took a step back, and I realized I had to train my voice to do things. It had taken off in a way I never expected, so I had to give myself a chance to do this and get better at it. This was a good first start, but I wanted to see how much I could refine it. You constantly learn new things your voice can do because the instrument changes over the years. It’s been fantastic.

Did you grow a mustache or did you already have one?
If given a choice, I would never have a mustache. It’s like the penance you have to do to be Freddie Mercury. You have to have a bloody mustache on your face. It’s my least favorite ornament. I can grow them quite quickly. If I get a couple of weeks off, the first thing that comes off after my coat and my hat is my mustache.

What is your wardrobe like? You must have expanded it.
The wardrobe is great. Freddie had such great taste in costumes. He had such a distinctive style with the high-cut trousers and short tops. He’s very attentive stylistically. It’s great fun to work with.

What are some of the venues that you played that Queen also played?
We have done Forest National and some arenas they never did. This Christmas when we get back to England for some shows, we play some of the Motorpoint arenas over here. We try to keep our feet in both camps. It’s nice playing arenas because you can put on a bigger show and have more elbow room. The lovely thing is that we don’t ever want to go away from the 1,000- to 2,000-seat venues. We have two versions we can take to different venues. You get good contact with the audience and fantastically charged atmospheres in some of the 1,000- to 2,000-seat venues.

I imagine your repertoire has expanded over the years. How many Queen songs can you now play?
I never sat down and counted. It has changed over the years. Certain songs bubble up and suddenly you start focusing on songs. I will play some of the Brian [May] tracks because it gives me a break on vocals. I like to see how we do on some of his songs like “Long Away,” which is from A Day at the Races. I love that track. You can see the career Brian would plan as a solo artist, which he did have later on. Songs like that fascinate me. They still seem so effervescent and fresh. And “Sail Away Sweet Sister.” Things like “Good Old-Fashioned Loverboy” is on Greatest Hits, but it never charted. It’s still fun to play.

Do you ever play albums in their entirety?
I don’t think it works with Queen. You got so much great material from such a wide range of time and so much of that material is from different decades. I’ve seen that bands that do it. I can see there’s merit. But the show we’re doing makes you feel like you’re at the Queen concert rather than the Queen museum. Sometimes when you play a whole album, you are slavishly tied to that concept. It’s so much fun juxtaposing a song from the ’70s with something more like “These Are the Days of Our Lives.” You’d be missing out on all those lovely juxtapositions.

Why do you think the band’s music has endured?
I think you can’t tie Queen down to one thing. They’re so different throughout the decades. The albums are so rich and varied and change from year to year. They never seemed to attach themselves to just one genre. They spread themselves wide and thick. The quality of the writing was so good. When they discover them as an album band rather than a singles band, they discover there is so much there. There were the Freddie [Mercury] tracks and Brian [May] tracks and the Roger [Taylor] tracks. You got to know the personality of the band. When something like the film Bohemian Rhapsody comes out, you’re immediately thrown into things and it gives a narrative arc. That would just be pale and just blink out if the music wasn’t there. Anytime a spotlight comes to Queen, people turn to the albums and find there is a treasure trove of stuff there. It’s extraordinarily rich and extraordinarily good.