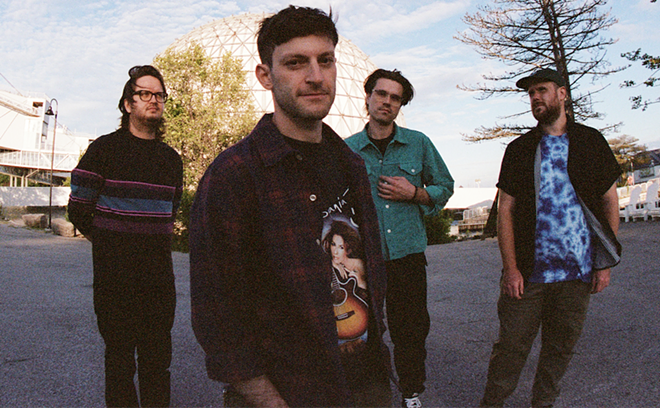 Vanessa Heins
Pup.
When Toronto-based indie rockers Pup set about making their latest studio album, The Unraveling of Puptheband, they couldn’t take the typical approach and leisurely go back and forth between their homes and the recording studio. Because of COVID restrictions, they had to isolate themselves. And not any studio would work. They chose to work out of a bat-filled mansion in Bridgeport, CT with produce Peter Katis.

During the five or so weeks that the band spent holed up at Katis’s studio/mansion, the band took a few more liberties than normal and incorporated new instruments like piano, synths and horns for the first time. Sarah from Illuminati Hotties, Kathryn from NOBRO, Mel from Casper Skulls and Erik from Remo Drive joined the mayhem.

“We could record at all hours,” says guitarist Steve Sladkowski via phone from an Asheville, NC tour stop. Pup performs on Friday, June 3, at House of Blues. “We spent five weeks there and went more and more stir crazy as the process went on. Throughout the pandemic, and in the recording process when it was just the four of us, we learned that we were our own support network. We could experiment a little further and make creative choices that maybe we wouldn’t have been pushed to do in the past. That allowed use to have a natural growth in the songwriting. There’s a palpable sense of confident decision-making, and at the same time, the whole thing is just about to go off the cliff.”

Sladkowski estimates the band utilized about ten new instruments in the making of the album.

“We had synthesizers and loops that we threw in and real horns and fake horns and different kinds of percussion and acoustic guitars, which, oddly enough, we haven’t used,” he says. “Peter [Katis] was the best kind of Yes Man. He was willing to try anything. If anyone had a crazy idea, he would say, ‘Let’s try it.’ He was also quick to say, ‘Oh, that’s not working.’ That open-mindedness and push and pull and not wanting to be worried about getting the perfect takes right away was great because we knew had five weeks of non-stop recording time.”

The album begins with the rather primitive tune, the Daniel Johnston-like “Four Chords,” a beautiful ballad that commences with nasally vocals and gentle piano that’s frankly out of character for the usually raucous band. The song eventually explodes with guitars and synths, but its somber beginning suggests The Unraveling of Puptheband isn’t going to be the typical Pup album.

“That song came about in the eleventh hour before we went to the studio,” says Sladkowski. “A week before leaving last year, [singer-guitarist] Stefan [Babcock] sent us an email, and it said, ‘A funny song for my friend.’ It was a rough recording of ‘Four Chords.’ We thought it was funny.  We had it on the backburner throughout the recording session. Stefan went to bed early one night, and the three of us sat in the kitchen on the main floor of Peter’s studio and thought, ‘What if we open the record with the song?’ When we pitched it to Stefan, he was like, ‘What the fuck is wrong with you guys?’ We had to convince him. Thinking about it now, I don’t think there’s any other way the album could open. It’s one of those happy accidents that happen when we’re recording.”

With its brittle guitars and upper-register vocals, “Matilda” suggests the band’s approach to songwriting has evolved and matured. The song builds nicely on its pop-punk energy and shows the group has the ability to deliver accessible material.

“Stefan’s guitar, which is the focal point of the song, was given to him by a friend in a moment of need back when we were touring all the time and not making any money,” Sladkowski explains. “We had a difficult show in Richmond, VA, and he had had a guitar break. This friend of ours from D.C. sold it to Stefan for a song, no pun intended. During the pandemic, we were all playing a lot of piano. I think Stefan felt guilty not playing the guitar that had so much meaning behind. He came up with that beat, and it made a great narrative to the song.”

Babcock penned one of the album’s best songs, the shimmering single “Robot Writes a Love Song,” in 15 minutes in the back of his car.

“Stefan has always said that he wanted to write an earnest love song, and every time he did, he sounded like a robot,” says Sladkowski. “He flipped that idea on his head. Stefan has such an active brain in terms of songwriting and lyrics. Some of the stuff he comes up with, I’m in awe. I don’t know how he does it. It’s amazing."

With roots that go back a good decade, the band can now choose songs from four albums for its live show. Sladkowski says it’s a good problem to have.

“We were laughing about this when we getting ready for the tour and thinking how interesting it is to have four records to draw from and figuring out what songs to play from each record,” says Sladkowski. “At the end of the day, the live show has been the four of us bringing it in terms of energy, and nothing has changed in that regard. There’s a little more attention in terms of lighting and staging. When we started the band, we didn’t have any ideas about that and didn’t think we’d be in a place where we could do it. A lot of this is new to us as a reality in terms of things we can do. We’re learning and growing and helping to evolve the show without sacrificing the energy and rawness that we have hung our hats on. I think we have found a balance.”