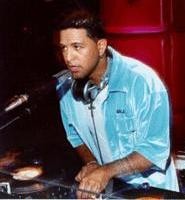 Getting the crowd jumping was DJ EV, spinning hot hip-hop and R&B, skipping between today's hot tracks to throwback hits. EV threw out sure party-starters, from Montel Jordan's "This Is How We Do It" to a few Nelly favorites. He even dipped way back to the late-'90s Rap group Camp Lo, with its classic hit "Lucini." What better way to welcome a native New York DJ than to hear Camp Lo spitting out those famous lyrics, "This is it, what?"

When Skribble, a former MTV DJ, took the table, he had no intention of being punk'd. With the DJ booth horn blasting and the confetti dropping, he showed equal fury on the turntable, delivering masterful scratches that commanded his audience, "Rock ya body."

Skribble began his night with a powerful mix of Beyoncé's "Crazy in Love," and from there he did what he does best, commanding the audience to "throw yo' hands up" to Missy Elliott's "Work It" (to which he added a fierce bass line); it even seemed at one moment that he was going to swerve this already crunk party into house and soul-jazz joints.

This Thursday-night set turned out more than hot DJs on wax. The ladies were hot, with club-set hair and the stilettos to match, while the fellas were geared in chill-back streetwear, with baseball hats to the side and polo shirts worn as only true street-chic fashionistos could wear them. Most impressive, since this was a hip-hop joint, Cleveland showed restraint with the bling-bling, from the eclectic mix of young artists and laid-back ballers to the commensurate mix of hot females.

For those just in the mood for a dance party, head over to the Grid/Orbit, where resident DJ Rob Sherwood spins what you need to finish your weekend right with groov-a-licious dance music. Sherwood offered a little something for everybody, taking a classic Prince hit and jamming it between Annie Lennox and Madonna, while keeping the crowd popping with his creativity. He kicked it to the dance floor and stirred up the crowd with a mix that included the Eurhythmics' classic "Sweet Dreams (Are Made of This)" mid-set. While his mix was edged, it was classic enough to take you back in time without actually making you want to revisit the '80s.