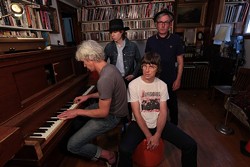 Yep Roc Records
There was already a thriving indie rock scene in Halifax when the power pop group Sloan formed there in 1991. Sloan, however, was one of the few bands to break free to become a national act.

Now, all these years later, the band, currently based in Toronto, remains one of Canada’s finest musical exports.

Earlier today, the group issued “The Day Will be Mine,” a catchy, guitar-heavy new single that comes in advance of the release of Sloan 12, due out April 6.

The album will be the group’s first studio release in four years.

In addition to issuing the new single, the band announced tour dates. It will play the Grog Shop on June 19. Tickets go on sale at noon on Friday.