Indie Rockers Guided By Voices to Play Grog Shop in May 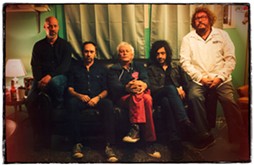 As a press release announcing the album explains, Pollard doesn’t take double albums lightly: “One reason he's planned and abandoned several would-be GBV double albums in the past is his high regard for foundational works like Quadrophenia, The White Album, The Lamb Lies Down on Broadway, Daydream Nation, Zen Arcade, Double Nickels On the Dime – ‘defining records for these bands’ says Pollard.”

In the wake of performing at the Coachella Valley Music & Arts Festival in April, the band will play a few gigs in the Midwest, including a May 6 show at the Grog Shop.