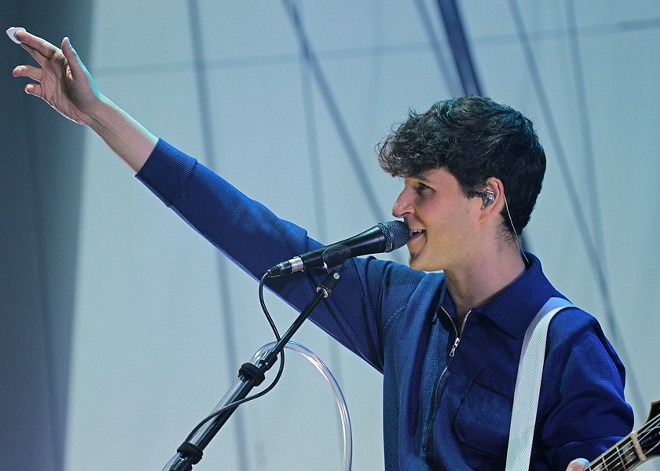 Samantha Fryberger
Improbably, at least by the standards of the bleak start of summer in Cleveland, Vampire Weekend’s stop at Jacob’s Pavilion at Nautica last night couldn’t have landed on a better night, as a mostly millennial crowd of fans caught a sold-out show of tunes as breezy and fun as the Lake Erie waves that backdrop the venue.

Compared to the band’s last stop in Cleveland, a greater ensemble of supporting musicians flank front man Ezra Koenig on this tour, which is in support of the band’s latest album, Father of the Bride. Joining founding members Chris Baio, Chris Thompson and Koenig, guitarist Brian Robert Jones and guitarist/keyboardist Greta Morgan along with an additional percussion player stationed behind a second drum set helped to fill out the band’s sound and allow for a more diverse range of instrumental interplay.

On Father of the Bride, folksy, jam-like elements have infiltrated the band’s style, which has evolved from the buttoned-down indie pop that catapulted the group to fame in the latter half of the aughts. The new influences and the additional instrumental heft from Jones and Morgan helped to produce fresh takes on hits and cuts that encompassed a two and a half hour set spanning all four of the band’s records.

The band’s proclivity to be adventurous on its classics was apparent from the outset. After opening with a romping rendition of Father of the Bride’s “Sympathy,” Koenig and Jones traded guitar riffs before synching together on what would become a frilly new opening to a throwback tune in “White Sky.” It was the first of many instances where Koenig conducted the band through an off-road, yet calculated, path into the band’s established hits, which often resulted in a roar from the crowd once they realized where the jams were headed.

Participation from a captive audience was far from an issue throughout the show, as chants from the crowd on “A-Punk” — perhaps the band’s most popular hit even now, despite debuting over a decade ago — could likely be heard from a mile off by passengers on the Nautica Queen as it sailed the lake. Even after lulls on slower songs, romps like “Diane Young” and “Cousins” seemed to be strategically placed to keep the crowd on its feet through the encore.

It’s rare that a band saves new concepts for an encore performance, so it was refreshing to see Vampire Weekend unveil new visual touches to the show as it rounded its last act. As the band returned to the stage to perform “Big Blue,” the giant, inflatable Earth that hovered above the band throughout its set was lit to be deeper shades of blue and green than it had been all-night, and flags depicting the band’s newly adopted logos burst down from the top of the stage at the song’s apex.

After a soulful cover of Crowded House's “Don’t Dream It’s Over," Koenig mandated that the last couple songs be sourced from crowd members in bucket hats — inevitably leading to calls for throwback “Ottoman” and newer cut “How Long?” Ending the night with a tight performance of “Ya Hey” as giant globe beach balls were cast out onto the audience’s sea of hands, Vampire Weekend’s shimmering performance brought a much-needed ray of sunshine that will (hopefully) lighten up Cleveland’s summer concert series.

Supporting Vampire Weekend on the tour is Chicano Batman, a Los Angeles-based quartet that opened the night with soulful jams. Dressed fully in dark suits, the band effortlessly slinked through a 45-minute set of synth-driven rock. Opting to pump up the still-filling-in crowd with a series of “O-H-I-O” chants — maybe a couple more times than was necessary — the band’s peculiar style, which included many instances of switched-up time signatures and speeds, was unique, if not hard to discern where one song ended and the next began. Even so, the band proved its merit to open for the likes of Vampire Weekend on songs such as “Freedom is Free,” which featured a fun bass line and a cool, lounge-like sound that fit the fine atmosphere.