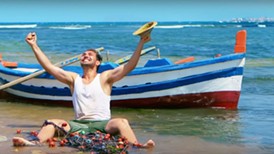 As part of a 12-city tour, the Italian motion picture comedy-drama Briciole Sul Mare (subtitled in English) will have its local premiere on April 22 at the Masonic Temple in Ohio City.

The film's screening takes place at an event dubbed Rocambolesco-Spectaculare! An Evening Celebration of Joy, Family and Tradition!

The movie centers on a fisherman living in the south of Italy whose regular fishing trip takes an unexpected turn when he falls asleep.

The event coincides with the celebration of Italian-American heritage month. In addition to the screening, the vocal group and Grammy Hall of Fame international recording artist,  The Platters, will perform with Italian recording artist and Briciole film star Walter Nestola and Italy's  RAI-TV's The Voice's Paola Gruppuso. The two will perform their songs from the official motion  picture soundtrack). The event will also feature the U.S. debut of Italian singer Amato Scarpellino.

The $150 VIP ticket includes a meet and greet and photo with all artists, a special reception catered by rising Italian American culinary TV personality Mike Fucci and premium seating.

Reserved tickets cost $75 and include admission to an after concert reception catered by Dana Gallo Strayton (The Princess of Prince Street) of the Prince Street Cafe and Bakery in  Bedford, Massachusetts, which is featured on Buddy Valastro's Bakery Rescue series on the TLC Television Network. Student/Senior cost $25. They include the same benefits as the reserved seating tickets but at a special price.)

Proceeds will benefit, in part, Attività Scolastiche Italiane (C.A.S.IT., Inc.), a non-profit educational and professional organization devoted to the promotion of Italian language and culture in public and private schools throughout New England. Proceeds will also benefit the Infant Jesus Hospital in Rome and Gaslini Hospital in Genoa.