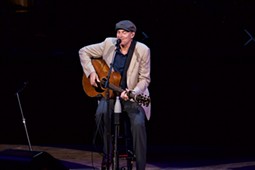 Scott Sandberg
“When you run out of sexy, you have to go for cute,” singer-songwriter James Taylor told the capacity crowd at Blossom last night as he justified showing pictures of an adorable pug on the video monitor behind him as he played the folk-y, whimsical “Sunny Skies.”

That statement accurately summed up his approach to the two-hour concert.

You can see a slideshow of photos from the performance here.

At one point in the early 1970s, Time magazine declared Taylor was the face of “The New Rock,” which they proclaimed to be “bittersweet and low.” These days, Taylor, who cordially told stories about his past and delivered them with perfect comic timing (his ability to stammer and pause at just the right moment reminded us of standup and actor Bob Newhart), shamelessly revels in revisiting his past glories, preferring the "bittersweet" to the "low." Not that there’s anything wrong with that. Clearly, the audience at last night’s concert loved the approach and gave him more than one standing ovation.

Wearing a gray snap cap and brown sport coat, Taylor sauntered onto the stage last night with his eight-piece All-Star Band (the group would expand to a 10-piece when the two-man horn section would join it) to deliver his 1971 hit “Carolina in My Mind.” With three backing singers cooing alongside him, Taylor capably played the tender ballad.

On his current summer tour, Taylor has played the same set night after night, but he altered his set list for last night’s show to include the tune “Blossom,” appropriate given the venue, and told the audience he felt it was “amazing to come back” to the place after all the years. He also altered his set list to cover the Jimmy Webb track “Wichita Lineman,” which he dedicated to the late Glen Campbell, who recorded the song back in 1968. His rendition of the track had a real tenderness to it and served as a fitting tribute to the great Campbell.

He introduced “First of May” with a funny song about his father, apologizing in advance for his use of profanity. The tune featured a vigorous mid-song drum and percussion solo but came off as a bit too freeform as the band lost the tune’s thread about halfway through.

With colorful graphics projected on the video screen behind the stage, Taylor turned “Mexico” into a cheesy sing-along and then hammed it up for the blues jam “Steamroller,” telling the audience, “Some of these songs mean a lot to me. Not this one.” By the track’s end, he was singing gibberish, much to the crowd’s delight. A New Age-y sax solo emphasized the schmaltzy side of the ballad “Don’t Let Me Be Lonely,” but some gritty electric guitars brought his rendition of Carole King’s “Upon the Roof” to life.

Taylor would close the set with a series of hits, starting with “Something in the Way She Moves,” a Cat Stevens-like song that possessed a simple beauty as Taylor’s understated vocals made it resonate. He introduced “Sweet Baby James” with the story of how he wrote it for his brother’s newborn child. The lullaby had a waltz-like quality with its elegant accordion and electric guitar textures.

A stripped down rendition of “Fire and Rain” worked particularly well and an exuberant Taylor even ad-libbed and scatted at the song’s conclusion. His gospel-inflected rendition of “Shed a Little Light” brought the capacity crowd to its feet. With its images of rainfall, “Shower the People” came off as a bit too sentimental, but his jazzy rendition of “Your Smiling Face” was truly spirited as was the set closing cover of Marvin Gaye’s “How Sweet It Is (To Be Loved By You).”

The encore included a cover of Chuck Berry’s “Johnny B. Goode,” and opener Bonnie Raitt joined Taylor on the tune. She effectively played guitar and traded vocals with him.

Raitt, it should be said, delivered a particularly well-received hour-long opening set that featured a beautiful rendition of the John Prine tune “Angel from Montgomery.” Taylor joined her as she sang John Hiatt’s “Thing Called Love,” a song that allowed her to show off her guitar skills, which she’s still got. Her solo on the tune was downright nasty. She and her band received a standing ovation at the set’s end and she graciously thanked the audience for its response while reminding everyone about our responsibility to "save the planet." She continues to be a class act.