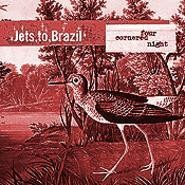 Jets to Brazil's pedigree has really been problematic only for the fans who can't seem to reconcile its past. It's admittedly difficult to separate guitarist Blake Schwarzenbach from his six-year stint in Jawbreaker, one of the most influential post-punk bands ever to strike an angular chord. The rest of JTB -- guitarist Brian Maryansky, bassist Jeremy Chatelain, and drummer Chris Daly -- is equally linked to its emotional and musical pasts through the bands Van Pelt, Handsome, and Texas Is the Reason, respectively. Everything that Jets to Brazil has accomplished so far, first on its solid 1998 debut Orange Rhyming Dictionary and now its sophomore release, has been designed to cloud fans' memories of previous glories. The difference between Dictionary and Night is the fact that the group has finally solidified after its initial effort as a band, with the material on Night standing as JTB's first attempts at writing together.

Four Cornered Night is proof that Jets to Brazil has much more on its collective mind than its genealogy. With an almost self-conscious love of Anglo pop and '80s new wave, JTB shimmers, giving off a vibe that suggests Cheap Trick and the Cars, as interpreted by Camper Van Beethoven. Night is unquestionably a pop album, full of infectious melodies and some honest-to-God hooks, but it's decidedly off-kilter and just slightly out of focus. Jets to Brazil is clearly not attempting to mimic any of the bands that helped spawn it, but it's building a fascinating new structure on sturdy foundations.