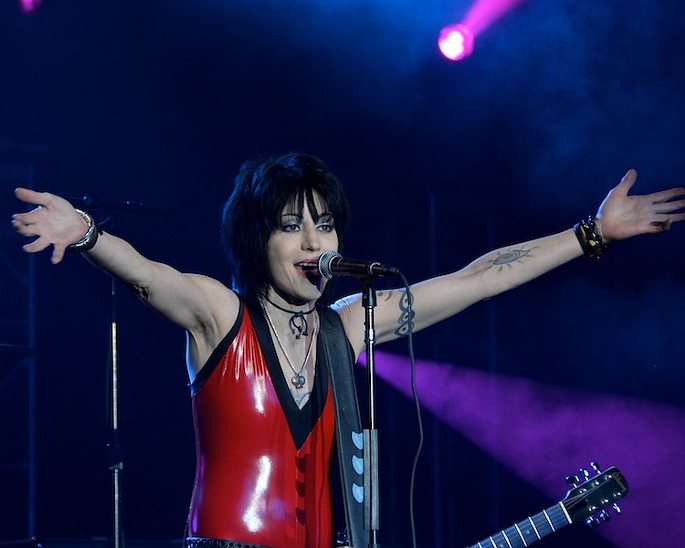 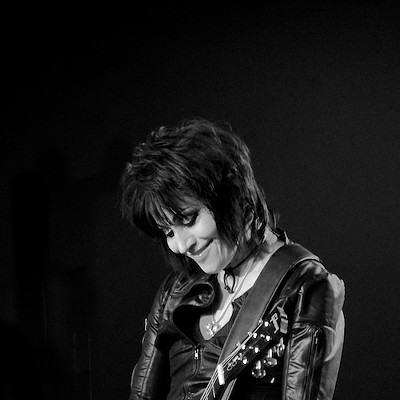 In Richard Linklater’s cult film Dazed and Confused, actor Matthew McConaughey, who plays a guy who’s regularly hanging out with people much younger than himself, delivers one of the movie’s best lines. “That's what I love about these high school girls, man,” he says. “I get older, they stay the same age.” You could say the same thing about Joan Jett’s backing band the Blackhearts. The diminutive singer-guitarist gets older, but the guys in the band (with the exception of aging keyboardist Kenny Laguna, who thankfully keeps to the shadows) appear to stay the same age. Jett, who played the first-ever show at the new Hard Rock Live in Northfield last night, was backed by a group of tattooed and spiked hair dudes who looked like they could pass as Green Day. They worked well with Jett too, jamming on several tunes and playing with punk rock-inspired energy.

Jett kicked off the 90-minute concert with the glitter-rock inspired “TMI,” a tune from her new album Unvarnished. She then delivered the stuttering anthem “Cherry Bomb”; her raspy voice was well-suited to the song and worked equally well on a grunge-y rendition of “Do You Wanna Touch Me” and a punked-up version of “Bad Reputation.” She then turned to more material from Unvarnished and introduced “Make It Back” as a song that she wrote after seeing the people in her Long Island, New York neighborhood work together to rebuild in the wake of Hurricane Sandy. While the set slowed a bit as the power ballad “We Are Not to Blame” didn’t have a good enough hook to it, Jett got back into the groove with her catchy new single “Any Weather." "I Hate Myself for Loving You" became the bombastic anthem that it is — the arena rock tune would be a good one to play at Cleveland Browns games. The encore got off to a shaky start with the didatic “Reality Mentality” but then finished strong with a rendition of “Little Drummer Boy” and a cover of “Everyday People” that turned into a rigorous, show-closing jam.

The facility itself features terrific sound and lighting. It’s strange, however, that in a racino decorated with some fantastic rock memorabilia, there’s not a single item on the Hard Rock Live walls, making it look more like a large conference room than a concert hall. And the fact that’s there no place to simply stand and watch the concert made things a bit awkward too since some audience members chose to stand for the entire show and others chose to sit. But the place has great sightlines and possesses a real intimacy despite its size (capacity is 2200), and these are only minor quibbles with a venue that should be a good addition to Northeast Ohio’s already strong circuit of rock clubs.