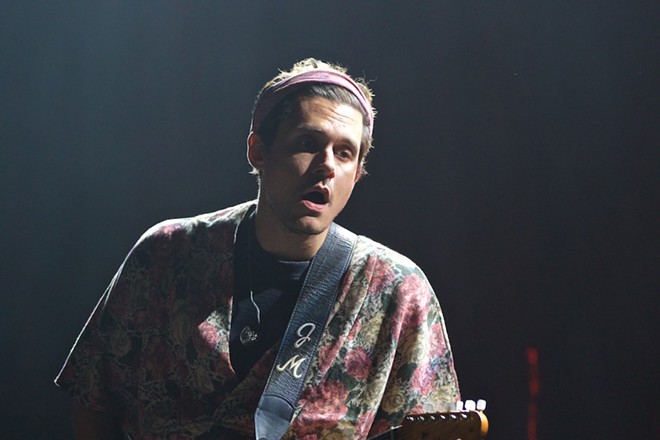 SCOTT SANDBERG
Lost in the groove.
With a dynamic show that shifted from full-band to solo, John Mayer laid down a crisp set of tunes in the late-summer air at Blossom last night. If you wanted to dance, you were set; if you wanted to relax in an oversized inflatable and just straight chillllll on the lawn, well, Mayer took care of you.

I came into the show wondering whether Mayer's tours with Dead & Co. would have a visible influence on his solo show. He shined in that setting, gracing Blossom's stage just two months ago, and I was curious how that bluesy Jerry Garcia DNA would translate to his sometimes-poppier songwriting. I had only listened to Mayer on a cursory level, respecting his chops and knowing intrinsically that he commanded a presence.

Once we parked, I immediately noticed some Dead stickers on a neighboring car. The crowd, as I had figured, was pretty diverse: old heads and younger Mayer fans alike.

The structure of the show highlighted Mayer's different approaches to music. He ran through songs with a full band, a trio and as a solo acoustic guy. Throughout, the lights were pretty thrilling and almost reminiscent at times of the Dead & Co. shows. There was at least one very purple moment in which we basked.

Much as I was hoping, Mayer immediately lit into the uptempo and very bluesy "Belief" with some Rolling Stones influences throughout.

A few songs in, Mayer grabbed an acoustic guitar and briefly addressed a fan who had been holding up a sign all night, asking whether her arms were getting tired and whether she was able to even enjoy the show (what with all the sign-holding). He told her to put it down, and he played a delicate rendition of "Wildfire." The crowd went nuts.

After that tune, Mayer began almost inexplicably yodeling (he was pretty good at it) and describing one of his favorite "sadistic" games as getting his friends to do an impression of a celebrity while yodeling. He did a mighty convincing Jack Nicholson in full-on yodel.

From there, the highlight for me: Mayer's sweet take on "Free Fallin'." I actually hadn't known that he did that cover, although just a few minutes earlier my travel companion told me about how much she loved it. We were both very glad to catch that one.

The acoustic portion of the night was nice, and Mayer made a point of "taking a trip down memory lane" with "Your Body is a Wonderland." Again, the crowd was excitable as hell.

I was sort of at a loss as far as the setlist was going; I recognized "Why Georgia," though I had to be told twice what it was called. Very nice song. But as the show went on I did pick up on a sly "China Cat" tease later in the show and both "Crossroads" and "Wait Until Tomorrow" covers with his trio. The blues lineage was strong throughout the show, and it got me thinking with a chuckle about how maybe I've been missing out on Mayer tour for too long.

Dawes opened the show with a very earnest set that flowed through mostly older songs, as far as I could tell. Spotlights flashed to and fro, and the band humbly thanked the crowd for helping cap a terrific tour. "Time Spent in Los Angeles" was a great tune, and their whole performance worked as a nice complement to Mayer's set.