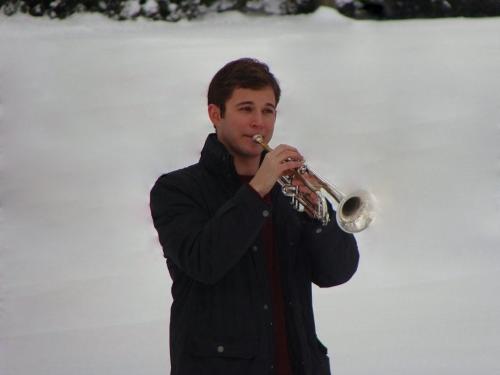 After finishing his undergraduate degree at Oberlin and starting to build a reputation as a player in Cleveland’s jazz circles, trumpeter Josh Rzepka, an Akron native, took off for Boston University last fall to work on his master’s degree. (He also co-produced and played on singer-pianist Harry Bacharach’s Live at the Velvet Tango Room release in August 2008.)

There he started composing material for the first time, and when he returned to Cleveland this past spring, he went into Painesville’s SUMA Recording with engineer Paul Hamann and recorded nine of the 20 tunes he’d written for his debut album, Midwest Coast.

Rzepka will be debuting the album with a CD-release party at 8 tonight at Nighttown.

He’ll be accompanied by the three stellar local jazz players who supported him in the studio: pianist Jackie Warren, bassist Peter Dominguez and drummer Ron Godale.

Rzepka will be heading back to Boston shortly to finish his degree, so you’ll want to catch him now. —Anastasia Pantsios