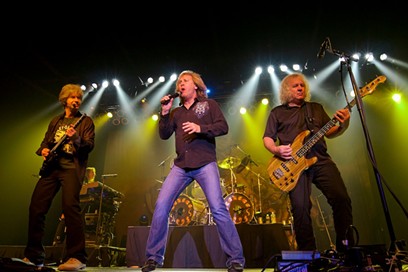 Scott Sandberg
Fans of prog and ‘70s hard rock got a heavy dose of both at Friday night’s Kansas concert at Hard Rock Live where the band delivered a tightly executed 90-minute set that was diverse and filled with a number of surprises for longtime fans. You can see photos from the concert here.

For this writer, it’s not hyperbole to say that it was the best Kansas show I’ve seen, which is saying a lot, considering I saw the band numerous times with original lead singer Steve Walsh at the helm when he was still in his prime.

Bands like Kansas (and this is not the first time that they’ve faced this situation) find themselves in an interesting predicament when they get several decades into their career and find themselves without a lead singer and decisions to make in regards to how they will carry forward.

As a music fan, each and every time it happens, I find myself skeptical — I’d rather see Journey with Steve Perry on vocals, but if he’s not willing or able to tour, I’d rather have the opportunity to see Journey than not see Journey. Similarly, with Foreigner — how do you replace a voice like Lou Gramm? With Gramm no longer at the peak of his vocal abilities (due to a medical situation that left him with vocal challenges), Mick Jones eventually made the decision to make a change and put together a new version of the band with Kelly Hansen on vocals.

The Kansas situation appears to be very similar to the one that Jones faced with Foreigner. Walsh had reached a point where it was not easy for him to handle the rigors of performing the Kansas catalog on a nightly basis in the live setting. So after more than 40 years (with a short break in the early ’80s), he put in his notice and wrapped up his career with the group this past August. As guitarist Richard Williams told Scene during a conversation for this week’s issue, they quickly thought of vocalist Ronnie Platt, who they had seen perform as someone that they knew would have the goods to carry the Kansas songs vocally.

He spoke of how the addition of Platt has reenergized this group and given them a new spirit and the drive to do anything that they might want to take on. From traveling to places they haven’t been in a long time to working on new songs to simply working up new material from the catalog on an ongoing basis to play live, all doors are open, as he told us. And honestly, if you talk to enough of these “classic rock” type bands, that’s something you hear quite a bit, but the follow-through doesn’t always happen.

But Kansas fully brought those words to life on the Hard Rock Live stage. In the past, setlists have remained fairly static from show to show; it’s immediately evident that there is a new spirit that has blown in with Platt’s addition. A quick scan of recent setlists reveals that the band is moving songs around from night to night and playing some songs one night that aren’t played on another.

“People Of The South,” from 1979’s Monolith, was the opening cut of the night and Platt quickly proved that he not only had the stage presence to match the always-visually charismatic Walsh as a performer, but also the vocal soul to deliver his lines that often would soar high with emphatic feeling throughout the course of the night’s set. Keyboardist David Manion, the longtime lighting person for Kansas has been elevated to share keyboard duties with Platt and he handled the familiar trills of “Point Of Know Return” with ease. Violinist David Ragsdale and bassist Billy Greer, both familiar fixtures in the Kansas lineup for many years now, surrounded Platt’s vocals with additional harmonies, with Greer, who was celebrating his birthday, trading vocals with Platt on “Miracles Out Of Nowhere” from the classic Leftoverture album and “Sparks of the Tempest,” from 1977’s Point Of Know Return album.

Six songs into the set, it was evident that Platt was giving it his impressive all as the group wrapped up “Reason To Be,” another Monolith-era cut with the vocalist breathing heavily and receiving an enthusiastic fist bump from Ragsdale at the song’s conclusion.

Even at 90 minutes in length, there was still plenty of room for extended jamming during the 16-song set, whether it was drummer Phil Ehart bashing away during the midpoint of “Closet Chronicles” or Ragsdale dueling with guitarist Richard Williams on the solos in “Portrait (He Knew).” And of course, if you’re going to play a song called “Belexes,” as they did, reaching back to their 1974 self-titled debut, one can expect that it might have huge instrumental stretches — and it did.

By the numbers, it was an impressive breakdown song-wise, with five tracks each coming from Point Of Know Return and Leftoverture, two cuts from Monolith and then one track from each of their albums in the early ‘80s, including “Hold On” from 1980’s Audio Visions album, plus “Play The Game Tonight” from 1982’s Vinyl Confessions and “Fight Fire with Fire,” from 1983’s Drastic Measures, which opened the two song encore and was dedicated to the men and women serving overseas. It was such an engaging set that it wasn’t until after the show when somebody pointed it out that they hadn’t played a single cut from the Song For America album, which celebrates its 40th anniversary this year —- not even the much-loved title track.

But if you were to take a straw poll of those in attendance, it’s safe to say that the majority probably would choose last night’s outcome — and the ability to hear deeper tracks in place of a couple of the more familiar cuts that might have been missing (“Can I Tell You” is another one that comes to mind).

It was the perfect setlist for lovers of Kansas and progressive rock and probably the proggiest night at Hard Rock Live since December’s Steve Hackett show. The substantial crowd in attendance clearly dug every moment of it. It was inspiring to see how much the spirit of this band has been renewed with the addition of Platt and one can hope that the honeymoon period, which is stretching towards the one year mark with the new vocalist on board, will continue to endure.