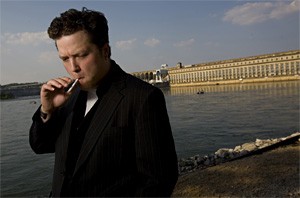 Jason Isbell contemplates the serene shoreline with a healthy drag of a cigarette.

When the Drive-By Truckers announced last year that they were losing one-third of their three-pronged attack team of singing, songwriting, and guitar-playing frontmen, fans of the left-leaning, deep-thinking, and hard-drinking alt-country band were understandably surprised and dismayed. Jason Isbell, the youngest of the triumvirate and the latest to join the band, was regarded as a spiritually invigorating force — a humane foil for bandleader Patterson Hood's wry life-lesson theorizing and Mike Cooley's hard-bitten tall tales from the dark side.

As tough as Isbell's departure may have been for fans, the fact is, it was a thoughtful, amicable parting — difficult, sure, but essential for the 29-year-old singer and songwriter to move to the next level as an artist. "There was nothing plain and simple about it, really," he says. "We discussed it for a while as a group and decided it was time to move on."

Isbell is grateful for the education he received during his six-year tenure with the Truckers — a band known for a tireless work ethic and a backbreaking touring schedule. "I learned about the music business, for better or for worse," he says. "I also learned a lot about touring, pacing myself on the road, and giving everything at every show. To tell the truth, I learned a lot about life in general."

Those lessons show up throughout Isbell's debut solo album, Sirens of the Ditch, a strong if occasionally uneven record that highlights his extraordinary gifts: an effortless sense of compassion for his songs' downtrodden protagonists, a searing insight into human foibles that belies his 29 years, and a warm, richly expressive voice that lies somewhere between a dustier Jackson Browne and less embittered Paul Westerberg.

Many of the album's tracks are informed by Alabama's historic Fame Studios, whose classic R&B and blues output links directly to Isbell's formative years as both a person and an artist. "I was trying to do a record that paid tribute to some of the music that was made in Muscle Shoals in the '60s and '70s," he says. "Those songs and the people who made them are still a very big part of my life."

Reverent homage is touching, but it doesn't always work to Isbell's advantage. "Hurricanes and Hand Grenades," for example, is blues by the numbers, trotting out far too many tired lyrical and musical clichés — excessive drinking-to-forget-the-bad-woman references, overwrought guitar solos — for a young man clearly armed with his own vision.

Much more successful are the moments that show off Isbell's knack for memorable, colorful details — like observing "scripture on grocery store signs" and admitting "dancing to Purple Rain" as a kid. Politics make for a sweetly sorrowful centerpiece in "Dress Blues," a vivid reflection on the untimely death of an old classmate, who lost his life to a roadside bomb in Iraq a few weeks before his 22nd birthday. "He was a few years younger than me, but I knew him and his family," says Isbell. "His wife was in the late stages of her pregnancy, and he was scheduled to come home for good."

Isbell's former bandmates are all over Sirens of the Ditch — from drummer Brad Morgan and bassist Shonna Tucker (who's also Isbell's ex-wife) to Hood, who shows up as both guitar player and producer on several tracks. Such friendly collaboration is the result of the record's long-running production schedule — it was recorded over the past four years, while Isbell was still in the Truckers — and the enduring mutual respect and admiration among everyone involved.

"He has literally limitless talent and ability," says Hood of his old bandmate. "I don't think there's anything he couldn't do, if he set his mind to it. [He has] an amazing vocal range and guitar dexterity, yet he doesn't let that get in the way of being soulful. When he joined the Truckers, it was going to be temporary. He was so incredible that within two weeks, he was a partner and all that. But people grow, and artists have to choose the path that best works for them."

The path carved out for Isbell now includes a rigorous stretch of touring. He's been on the road since the album's release last summer. At least he's had time to think about a sophomore effort somewhere down the road. "I have some of it written, but I won't get around to recording until this record has been exhausted," he says. "A few weeks ago, a fan told me he was 'looking forward to the future.' I am too."