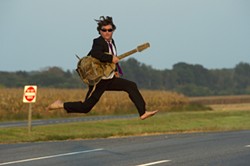 C. Taylor Crothers
There’s no one in the jam business like Keller Williams. The guitarist is a powerhouse mainstay of festival bills and a frequent collaborator with a broad spectrum of rock, funk, soul and bluegrass bands and artists. Blending humor with irrepressible rhythm and lead skills, Williams forged a path early on with his penchant for looping acoustic melodies on top of one another. He built a story as a man who could do it all.

These days, he moves kaleidoscopically from project to project, and along the way he’s picked up more than a few neat tricks to add to his sleeve. As 2018 unfolds, Williams is on the road as a solo guy once again. He released Raw, an all-solo album, last year.

“Raw started in 2011 as a concept album of 12 songs on 12 different guitars,” he says. “I did it, and I didn’t like it. Without the visual aspect — the guitars definitely sound different, but it was more meaningful [just] to me. I scrapped it.”

A few years later, Williams was touring on a bill with fingerpicking legend Leo Kottke. The shows were just straight acoustic and vocals, with none of the looping that Williams had brought to past incarnations. “I had nothing in my work of music that resembled that show,” he says, but he lent an open ear to the lessons that those shows had to teach him.

When a revamp of the Raw stuff came around, Williams resurrected some songs from those sessions with Kottke and then added six more. Out came a new, more complete album. It was a smooth and simple process, he says now, achieved nonchalantly while he was waiting for his KWahtro bandmates to wrap their tracks on Sync — the other album he released at that time (more on that in a bit).

On Raw, Williams trips through relaxes rhythms and heartfelt energy, like on the chords progressions in “2BU.” There’s a dose of deep, introspective reality in many of Williams’ tunes.

And he knows how to spin others’ work too: “Return to the Moon” is a cover of a tune by EL VY, a band assembled by The National’s Matt Berninger and Menomena’s Brent Knopf. The song’s colorful lyrics seem to work perfectly on a Keller Williams record. “It’s very, very different,” Williams says. “It’s kind of a dance-pop song coming from Matt Berninger, who’s like doom-and-gloom. It’s really cool, and it really caught me.”

Overall, Williams says, an album like Raw gets him back to some acoustic roots that he hasn’t touched directly in recent ventures. One of the tenets of Williams career has been the one-syllable album title, which is used to signal the tone or attitude of the music within. In this decade, prior to these last two discs, Williams has released Thief, Kids, Bass, Pick, Keys, Funk, Dos and Vape.

With Raw, Williams says he was given a chance to really dig into different tunings and unexpected uses of his guitars. It’s also just a fun album.

Sync, on the other hand, sees Williams in the studio with his KWahtro bandmates (guitarist Gibb Droll, bassist Danton Boller and drummer Rodney Holmes).

“That concept started with the idea of going directly into dance music, but with acoustic instruments,” Williams says. “What came out was kind of a groovy acid jazz. We still kind of incorporated those dance music elements, but not really going full-on there.”

The KWahtro visited Cleveland in 2016, painting Beachland Ballroom in extended funk improv and intricate jams. This time, Williams is on his own.

“There’s definitely 100-percent zero preparing for it,” he says. “That’s the beautiful thing of the day job, that is the solo act.

“There are a couple songs that go over all the projects, but very few,” Williams adds. But with his solo act, he can pull from the many outfits he’s been a part of — with only slight modifications. “It’s like, ‘Oh, yeah, I forgot I do this one!’ Without anyone else around, there are no rules. There’s a whole setlist there that can be a blueprint.” Williams can bounce from era to era in his stylistic repertoire, and he’ll take requests now and then, too.

Now, he’s working on an instrumental record that will continue that line of “acoustic dance music” thinking. He’s taken a lot of his solo instrumental pieces and amended them with additional melodies and percussion. The whole thing is pretty much done, and Williams expects it’ll be out in the spring. The title: Sans.

Being able to drive his own destiny remains a prominent goal in Williams’ career, even as he joyously works alongside some of his favorite musicians in the country. “It’s exhilarating, being a solo [act] and then working with other people and jumping into their worlds,” Williams says.

For instance, Williams helms a project called Grateful Grass (Grateful Dead tunes reinterpreted as bluegrass). These days, the band is rounded out by the Infamous Stringdusters, an exceptional bluegrass band that often dabbles in the arena of live improv. Elsewhere, Williams plays with More Than A Little a funk band out of Richmond, Va.

Projects like those give the guitarist a plethora of rooms in which to operate, to hone his chops again and again. “To be allowed to do that: I’m so very grateful,” he says.

And on the subject of the future, of the grand arc of his music? “Let the metamorphosis happen.”