Kenna Get a Witness? 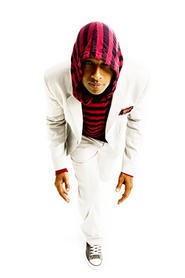 Artists respond to disappointing record sales in different ways. Some chase that elusive hit by any means possible. Some disappear for a while, re-emerging under a new guise, with a new style of music. And some stubbornly make the same album again, figuring the public can't be that stupid twice.

Then there's Kenna. The Ethiopian-born singer's reaction to his debut's failure to connect was as unique as his futuristic fusion of R&B and alt-rock: He decided to climb Mount Kilimanjaro in Tanzania.

"I felt like I hadn't reached the top of life's mountain, and I wanted to have a conversation with God about it," explains Kenna, phoning from New York.

But that holy conversation didn't occur as Kenna had planned. He got "terribly sick" just 1,000 feet from Kilimanjaro's skyscraping summit and had to abandon the climb. He was totally despondent about the situation until he had a talk with his father.

"My dad asked me what kind of [altitude sickness] medication I'd taken, and I told him it was sulfur-based," says Kenna (born Kenna Zemedkun). "He looked at me and said, 'You're allergic to sulfur.'"

For Kenna, that revelation became a metaphor for everything he did wrong while making his first album, 2003's New Sacred Cow, released on Columbia. His body's allergic reaction, Kenna now believes, was analogous to the public's rejection of the "artificial" elements infesting his debut. In other words, his whole Kilimanjaro experience was a novel way to learn the age-old lesson, "To thine own self be true."

"[I hungered] to make something for everyone else, rather than for myself," he says. "I was born at 9,000 feet in Ethiopia. I should have been able to make that climb, just as I was built to make this music. And there's no reason it shouldn't reach the masses, as long as it's honest."

Kenna feels that honesty lies at the heart of Make Sure They See My Face, his long-delayed sophomore effort. The title is both a commentary on Kenna's between-albums identity crisis ("I was a little schizophrenic, trying to decide what face I wanted people to see") and his newfound confidence.

"It's about going from daylight to being wide awake," he says of the disc, which refines the new-wave soul of his debut. "I'm not worried about the rejection part anymore. The people who are with me are gonna be with me."

Of course, if Kenna did make multiple mistakes while recording New Sacred Cow, we should all screw up so badly. Produced by Chad Hugo, a high-school friend and one half of the Neptunes, the record struggled to find a niche in the marketplace. But it made Kenna plenty of high-profile fans, from Limp Bizkit frontman Fred Durst to U2 manager Paul McGuinness, who declared Kenna the future of music.

Another was author Malcolm Gladwell, who was commissioned to write a piece on the singer for The New Yorker, but ended up devoting a chapter of his latest best-seller, Blink, to Kenna and his sales struggles. "A lot of people found me because of that book," says Kenna.

For Make Sure They See My Face, getting his journey across in song was key to Kenna. Hugo-produced tunes like "Sun Red Sky Blue" and "Baptized in Black Light" meld hip-hop rhythms and arena-size hooks behind the story of his quest. But telling the whole tale required some additional help, which is where another high-school friend, Pharrell Williams -- the better-known half of the Neptunes -- entered the picture.

After his family emigrated from Africa, Kenna attended school in Virginia with both Williams and Hugo. It's those old ties that helped produce a pair of songs that rounded out the album. One of them, "Loose Wires," was a happy accident that resulted from a malfunctioning speaker and "was one of the easiest songs I've ever written in my life," admits Kenna.

"I walked in the room, and Pharrell had made a beat. He was trying to play it, but the speaker kept staticking up," remembers Kenna. "He said to the engineer, 'We got a loose wire!' And something just hit me. I thought, 'Why did that mean something to me?'"

It went back, Kenna realized, to the spiritual disconnect he'd experienced after Kilimanjaro. But it also related to "Out of Control," another song about being out of synch with one's true nature.

"Say Goodbye to Love," meanwhile, is a dance-punk stomper that Kenna wrote at Pharrell's urging. It's based on knowledge gained during their long friendship. "There was a part of my journey that was missing, and Pharrell knew it. He said, 'I feel like I know something about you that you're not telling the world.' And he was right," explains Kenna.

This year, Kenna told his story to more people than ever before. He kicked off the American portion of July's Live Earth concert at Giants Stadium. He also opened for Justin Timberlake on a handful of European concert dates.

And despite numerous holdups, Make Sure They See My Face, originally scheduled for an early-summer release, will drop in mid-October. "I'm in good hands here at Interscope. I have a good team, and I have a good chance of getting people to hear this music," says Kenna, who has been on several labels during his short career, including a stint on Fred Durst's Flawless. But he appears to have found a home on the Star Trak imprint the Neptunes set up through Interscope.

Kenna, however, admits that old doubts occasionally test his newfound resolve. "It weighs on you to a degree," he acknowledges of his sales history. "You think, 'Am I not making music that people want to hear?' But it finally dawned on me that I don't have a choice. This is who I am. This is my face, and I'm ready to show it to the world."