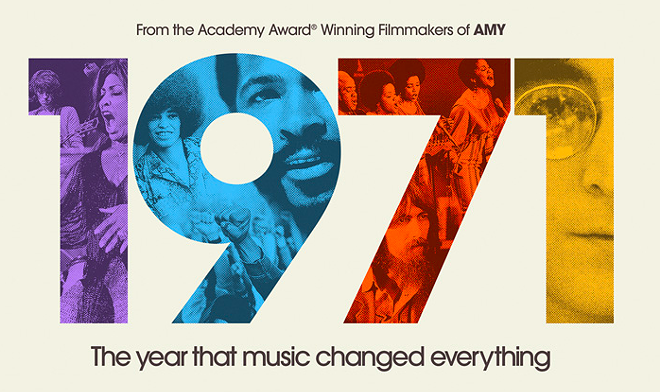 In the wake of the break-up of the Beatles, John Lennon left England and relocated to New York. Brit rocker David Bowie released one of his best works, Hunky Dory. The list of groundbreaking recordings goes on and on.

David Hepworth writes about these seismic cultural events in his book 1971 - Never a Dull Moment: Rock's Golden Year. And now, the new docuseries 1971: The Year That Music Changed Everything documents the time period. The series debuts tomorrow on Apple TV+.

While the bulk of archival material (interviews and clips of live performances) centers on 1971, the very first episode begins with footage from the Kent State shootings that took place in 1970. In a voiceover, Akron native Chrissie Hynde, a Kent State student at the time, discusses burning down the ROTC headquarters on campus.

"The military presence on our campus had to go," she says. "All these bands were making music in protest to the Vietnam War. By the time it came to 1971, we were fueled by this amazing music that everyone was making."

“There was a sense that 1971 was defined by an event that happened before,” says 1971: The Year That Music Changed Everything director James Rogan in a conference call when asked about the decision to frame the series with the Kent State tragedy that inspired the Crosby, Stills & Nash tune “Ohio.” “Marvin Gaye writes What’s Going On in the aftermath of the Kent State shootings. It gets released in January of 1971. [The shootings were] a real trigger event in terms of just how far the enmity between the anti-war movement and the government had become That played out in 1971 with Nixon’s reaction, the May Day rallies, the burglary of the FBI. Everyone was profoundly affected by it, so it seemed like a good place to start. It seemed like a rich opening salvo in a year that would go on to be definitive.”

Executive produced by Academy, BAFTA and Grammy Award winners Asif Kapadia (Amy, Senna) and James Gay-Rees (Amy, Senna, Exit Through the Gift Shop), the series aims to show how "the musical icons of the time were influenced by the changing tides of history; and, in turn, how they used their music to inspire hope, change and the culture around them,” as it’s put in a press release about the program.

The docuseries includes music from acts such as the Rolling Stones, Aretha Franklin, Bob Marley, Marvin Gaye, the Who, Joni Mitchell and Lou Reed.

“Hepworth’s book immediately resonated with us,” says Gay-Rees when asked about the origin of the series. “We are big fans of the music. That time period with the music and fashion and film is an interesting tipping point. We used his book as a basis and inspiration for our process. As we got more and more into it, we realized we didn’t want to make a chronological list show so much. We started researching the year in general and found it to be a very transitional and fascinating year. The ’60s crashed and burned with Kent State and Altamont and Manson and the Beatles breaking up in December of 1970."

Gay-Rees says the "failed optimism" of the ‘60s was replaced with "the golden age of paranoia."

"We dived into the waters of that society to find out what was going on," he says. "The output of music is extraordinary and compares favorably to most other years certainly in that era. We set about doing this exercise of what was going on in society to create this extraordinary output of music and what was the relationship between the artists and society and what they were responding to. People responded to the end of the ‘60s in different ways. Some people went to lovely villas in the south of France to immerse themselves in drugs, and some locked themselves in attics in Beverly Hills and disappeared down the rabbit hole as well, and some wrote protest songs. We built it out of that, and it became a thematic activity as opposed to a chronological activity.”

In the press notes, series producers talk about transporting viewers to a moment rather than just providing a chronological account of all the best musical moments from the year. With its terrific soundtrack and clips of spirited live performances, the series certainly accomplishes that goal

“We didn’t see [1971] as the past,” says Rogan. “Asif [Kapadia] and James [Gay-Rees] and Chris King, who has edited one of the films and was also an executive producer, set the bar with Amy and Senna, massive portraits of the lives of people we knew. This was taking that ad moving it into a different space. We wanted it to be completely immersive and visceral. When I was in the editing seat or conducting the interviews, I never thought I was talking about the past. It felt like we were talking about things going on still today. There is a nostalgia value in terms of people being so familiar with the music, but in my view, the music is as vital today as it was in 1971.”