Send a News Tip
The Jacket 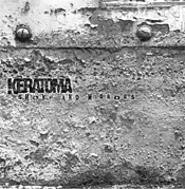 We're so used to seeing Marilyn Manson rub his pale ass against holy artifacts that it's easy to forget how exciting his band's music once was. The full-length debut from Cleveland's Keratoma sparks with rage, nearly re-creating Manson's band at its peak. But, with all respect to double-M's work, he seldom came off as pissed as Keratoma sounds on each of Smoke and Mirrors' 17 tracks.

Keratoma is made up of the principals from the former Slutbox, the main difference being former guitarist Chris Simmons' move to vocals, where he snarls about mass murder, drugs, and betrayal. Ex-Mushroomhead drum tech Tom Shaffner produced and mixed the disc at 'Head's Filthy Hands studio, and it sounds like a major-label release. The fast songs -- most of them really fast -- are gritty industrial thrash: Imagine Slayer's song structures, with the wild guitar leads replaced by operatic samples, helter-skelter keyboards that sound like an evil calliope, and beats fast enough to make a drummer need oxygen. Electro-rock is back, Cleveland.