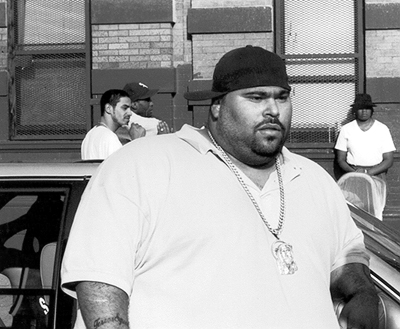 South Bronx rapper Big Punisher was one of hip-hop’s biggest stars during his heyday in the mid-’90s. Now, on the 10th anniversary of his death, he’s getting a career-spanning reissue: Legacy is putting out a 21-song compilation that coincides with tomorrow's release of the Big Pun: The Legacy DVD, a documentary about the Puerto Rican hip-hopper made by first-time director Vlad Yudin. Yudin recently spoke to us about his film.

How’d you wind up doing a documentary about Big Punisher?
About four years ago, I met Liza Rios, who’s his widow, and a few other people affiliated with Big Pun, and had an idea to create something that would talk about his achievements and create something special for the fans. From there, it was hard work. A lot of interviews and research and footage that needed to be collected. It took a couple of years and we’re now finally here. Myself and my partner and other producers were basically fans of Big Pun. That gave us more motivation to work even harder and make sure it serves him justice and highlights all his accomplishments.

Many of the people you interview — guys like Snoop Dogg, B. Real and Chuck D. — talk about his distinctive flow. Do you think that’s what distinguished him?
I think it’s that plus the punch lines he had and the humor he added to the lyrics. That’s what I noticed right away when I first heard him. He wasn’t just one way. If you hear someone with good punch lines, you remember that. All his songs have something in them that make you want to run them back again.

His ethnic identity as a Puerto Rican rapper was very significant, but he didn’t want to be famous just because he was Puerto Rican. How’d you try to handle that dichotomy in the film?
We delved into his background and asked if it was beneficial for him to be noticed or whether it was something he had to overcome. Different people gave different answers. It made him noticeable. But at the same time, he was the first solo rapper who sold over a million. Before that, I felt that record labels might not have wanted to put money behind him. But he was able to convince them to do it more marketing and he sold more records. After that, it wasn’t a question about whether or not to invest in a Latino rapper. In the industry, he made a difference.

In the movie, you show how he could be really violent when anyone challenged him. But he also seemed to be a very compassionate and devoted father. How do you reconcile those two images?
I think any human being has different sides to him. Just because he reacted at certain times in certain ways that doesn’t mean he can’t have love for his family and be a compassionate person. I think everyone has a funny side when they play around with their family or kids. He was a tough individual who had a lot of passion and love for the close ones around him.

You don’t shy away from the fact that his weight increasingly became an issue. Why didn’t Pun listen to anyone when he was told to start taking better care of himself?
That’s one of those things. People say he did listen, but it was hard for him to deal with it. something a lot of people have tried to help with him. He did try but sometimes you just can’t simply listen to someone.

How’d you end up with footage of him from the day before he died?
That footage was very exclusive and came from Liza Rios, his widow. She gave us some footage from the swimming pool and footage from the hotel in White Plains, New York, where he passed away.

What would you like people to take away from the film?
I want the fans of Big Pun to finally see something that they’ve been waiting for. It’s a treat for all the fans. A lot of people are even shocked by it after all these years to see something special on their idol. But I feel like the story is interesting enough even if you’re not a fan. I think we tell a story that anyone can understand. —Jeff Niesel