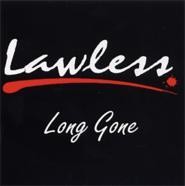 From its crisp modern honky-tonk to the band's stage names, Lawless sounds like the kind of country-western band you hear on the radio, playing clean-sounding songs about dirty living. With an affable twang, singer John Dillon Hardy offers vivid tales of drinking, love, and drunken love at the bottom of the ladder, probably in a low-rent trailer park, where guilt and passing trains give him one sleepless night after another. This debut EP finds the Cleveland quintet auditioning for the big time, proving their proficiency in an array of traditions with a wink and smile.

Chasing acoustic rhythms with electric solos, guitarists Steve Skrant and Don McGoun work together like a shot of Jack and a Budweiser. The disc captures the energy and chops that have made the band a top draw on the region's country circuit since 2002. And even if the boot-stomper "The Well Ran Dry" doesn't make it to the airwaves, it'll be a smash with everyone who hears it at the bar.