with the Librarians. Wednesday, September 20, at the Grog Shop. 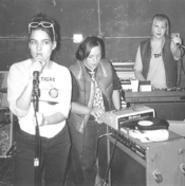 Le Tigre
Kathleen Hanna may have been at the epicenter of the feminist punk rock movement (hell, she was the epicenter), but she never got to see the whole thing through to its fruition. Starting out with her band Bikini Kill, Hanna roared forth with an agenda that was more interesting than the music she played to back it up. Yet that's what punk rock has always been about, and Hanna smartly used the format to build the base for a movement that seemed to hold enormous potential for new waves of underground postmodern feminist thinking. Quickly, however, the idea of such a movement was co-opted by the music industry, and the intelligent in-your-face-and-over-the-edge approach of Bikini Kill became lost in the enterprising rush to label the movement, market it, and put forth a salable poster "grrrl" (see Courtney Love). Not that any of this could stop a generation of forward-thinking women. A few bands continue to harness the punk rock power of early Bikini Kill (see Sleater-Kinney), and Hanna has turned both ambitious (her 1998 disc she recorded as Julie Ruin weirdly dabbled in sampling and quirky "tidbit" music) and groovy (with her new band Le Tigre). Produced by popster Chris Stamey (formerly of the db's), Le Tigre is a synthpop treat that's stacked with prominent dance grooves and weird sounds. The dynamic power of Bikini Kill has been replaced, rather smartly, by the glimmer of a disco ball. Hanna, along with other band members Johanna Fateman (a 'zine writer) and Sadie Benning (an indie filmmaker), alternate guitar, sampling, and singing duties, creating a very cool and quirky groove. Yet the band certainly has its feminist agenda -- the only difference with the message these days is that you can dance to it.