With Electrelane and Be Your Own Pet. Saturday, August 6, at Peabody's. 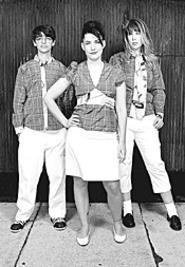 When Kathleen Hanna and her band Le Tigre did the unthinkable and signed with Universal last year, riot grrrls past and present gasped and waited with bated breath to see what would happen when the indie prom queen released a major-label album. What Hanna did was grab the mainstream by the pom-poms and release an accessible yet upright version of Le Tigre's electro-retro-pomo-homo feminist cheerleading. The band's latest, This Island, is equal parts sassy silliness (a drum-machine-happy cover of the Pointer Sisters' "I'm So Excited") and serious politicking (e.g., "Viz," JD Samson's shout-out to brave, unabashed butchiness). "TKO" combines both approaches in classic Le Tigre fashion -- bratty impudence meets activism in a tune that moves easily from the dance floor to the hipster dive bar to an antiwar march. This Island doesn't have the "authentically" impoverished low-fi grittiness of its first two albums, but this new spit-shined Le Tigre is a good example of an indie band trying its hand at crossing over and doing a decent job of it. And, hey, major-label resources can only up the ante for Le Tigre's fabulous matching-outfits-and-ironic-choreography live shtick.