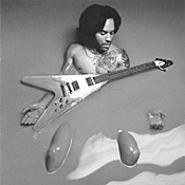 When Lenny Kravitz debuted at the tail end of the '80s, his colorful retro soul won him the title of Prince's heir apparent. He lacked that sort of reach, let alone grasp, but it turned out that his own genius lay in recycling old licks into new anthems that honored the big, dumb glory of rock.

So the fact that Kravitz begins his seventh album by declaring himself the "Minister of Rock 'n' Roll," in full scream and without a trace of irony, is a good sign, and it's confirmed by the remainder of the album, his best collection in a decade. He's a virtual one-man band again (like Prince, it's his most effective lineup), looting AOR playlists for a mashup of boogie riffs and Beatles-style majesty, while making Baptism sound as fresh and new as its title implies. Ironically, between the piledriving choruses and Bic-flicking balladry lies a newly intriguing introspection; the conflicted messages of "What Did I Do With My Life" and the query, "Could a wife and some children be better than being in a band?" make this a surprisingly searching set. But it isn't so much a baptism as an affirmation of faith, which Kravitz ultimately places in the power of classic rock. On this album, at least, that belief isn't misplaced.