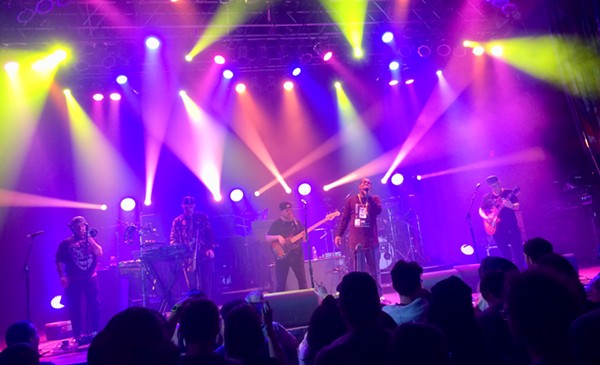 ERIC SANDY
There was no way around it. By the time Wednesday's workday had wrapped and another strange January afternoon had slipped into evening, there was no getting around the bald truth of the thing. America had fallen on nasty times. People were losing their minds! Here in Cleveland, thankfully, we had an out. We had funk music to dance to.

Lettuce stopped by the briefly balmy climes of the north shore for a half-sold House of Blues show last night, and it was a hell of a trip. If you were there, you're probably feeling all hale and hearty this morning. If you made the mistake of missing this one, well, there's a pot of coffee brewing in the break room. Have a ball!

For more than 20 years now, Lettuce has been providing top-notch party music for the masses. With a smattering of studio and live albums under their belt and a handful of lineup changes over the years, they're really firing brilliantly these days. The current Vibe Up tour has been garnering accolades up and down the touring circuit in January, and Cleveland was treated to another fine installment.

The band's musicianship is just incredible. I felt tempted throughout the show to focus on one guy's sound over others, but the full-group cohesion was impossible to ignore. For the uninitiated, we're talking mostly instrumental grooves here, although keys player Nigel Hall took vocal duties on a few songs.

The night built to a triumphant climax in the second set, when a friend of the band came out and joined Lettuce onstage with a djembe. He kicked the energy through the roof. At one point, Hall walked out to the front of the stage and just sat down to watch his friend play. It was a wonderful moment.

In fact, the whole night was a blissed-out retreat from the outside world. There's too much stuff going on out there. In here, at the show, with your pals in Lettuce up on the stage, things seem brighter, easier, more uplifting.