Art rockers turn down the pretension and crank up the guitars. 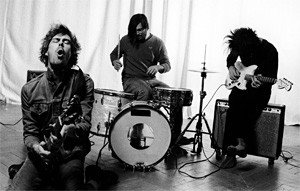 For more than five years, Liars made art-damaged noise records that required listeners' full attention. Filled with knotty, sprawling songs and graced with titles like They Threw Us All in a Trench and Stuck a Monument on Top and They Were Wrong, So We Drowned, the albums could be needlessly difficult.

But last year, the trio went into the studio with a handful of fragmented ideas and came out a few weeks later with Liars, its fourth album and — as its clear-cut title implies — its most stripped-down. It's also Liars' most accessible CD in a catalog that's far from approachable.

"We were reaching for immediacy this time," says frontman Angus Andrew, a six-foot-six Australian who's a lot friendlier than his often aggressive music lets on. "I'd been thinking about looking at music in a more traditional way. We just wanted to have fun and make a bunch of songs that sounded like stuff we were into when we were younger."

Liars' 11 songs range from spare indie rock to lo-fi pop — genres away from 2006's Drum's Not Dead, a prog-like concept album about the creative process. That CD culminated in a seven-minute percussive workout, "The Other Side of Mt. Heart Attack," which chronicles an epic battle between self-doubt and artistic proficiency. Liars, on the other hand, includes the two-minute "Clear Island," a straightforward blast of bare-bones garage punk.

"It's awesome to go into a project and study it," says Andrew. "That can help the overall result of the album. And it's beneficial for us to do that. From the other perspective, I don't always think it's the best thing for the listeners. We give them this information about what we are exploring, in hopes they would understand where we are going. For this record, we wanted to remove ourselves from that train of thought. We wanted them to digest the music on their own terms." In other words, while Liars may enjoy making complicated records, folks didn't necessarily enjoy listening to them.

Liars formed at the end of 2000 in New York City, where Andrew and Aaron Hemphill — classmates at Los Angeles' California Institute of Arts — teamed up with a pair of transplanted Nebraskans to make art punk that revolved around Hemphill's stuttering drum machine. They were influenced by the U.K.'s post-punk scene of the early '80s, especially Gang of Four's booty-shaking funk punk.

From the start, Liars has been hard to pin down. Band members attack their instruments with the ferocity and pretension of Sonic Youth. They write songs with cumbersome titles; "Grown Men Don't Fall in the River, Just Like That" and "Nothing Is Ever Lost or Can Be Lost My Science Friend" both appeared on their 2001 debut, They Threw Us All in a Trench and Stuck a Monument on Top. And they never really sound the same from track to track. Andrew — who plays guitar and sings — claims this is the point.

"We have so much ground to cover yet," he says. "It seems each record has a whole lexicon of music that we could utilize, but we pick just one or two. It seems endless. As long as we keep making records that are about what we're interested in, there's no end. There are so many genres worth exploring. It's a big, open road."

In 2002, Liars scaled down to a trio after the Nebraskans left and percussionist Julian Gross joined. In 2004, they released They Were Wrong, So We Drowned, which loaded up on tape loops, electronic bips and beeps, and a story about German witches. The song titles didn't get any more efficient: "If You're a Wizard, Then Why Do You Wear Glasses?" and "They Don't Want Your Corn — They Want Your Kids." It's their most experimental and challenging album.

Andrew and crew then decided to take their aural explorations one step farther — and cement their status as one of the world's most pretentious bands — by moving to Berlin, home to a long-standing electronic scene and the inspiration behind David Bowie's best '70s albums, as well as Lou Reed's druggy and depressing Berlin. "The environment always affects the music," says Andrew. "It's never been 'Let's go here and record.' It's more that, as a person, I want to feel things differently and reexamine.

"Every time we move, I rethink our place and surroundings," he continues. "We could work anywhere in the world and still be able to create our little bubble — as long as we can find the right elements to make us comfortable. There's this element of shutting out the world when we record. And walking around outside the studio, where things aren't the same, affects the music. That's when it becomes interesting. "

Drum's Not Dead is a definite product of the band's stay in Berlin. It stands as Liars' most ambitious piece and its most musically daring. Centered on tribal percussion fills and a near-impenetrable wall of sound, the CD pretty much demands to be listened to from start to finish, with no shortcuts or stops. "We used to get upset if people took songs randomly out of our albums," says Andrew. "We're always worried about wrapping it up with a nice ribbon, so it's cohesive. But our intention this time was not to be concerned with the final package. We just wanted to work on the songs, not how they relate to each other."

Now back in Los Angeles, Liars cranked out their new album with little concern for what came before it. The songs are loud, fast, and to-the-point. It's a garage-rock album made by guys whose record collections are more extensive than those prized by the usual record-collecting nerds. "We went back and listened to Michael Jackson," says Andrew. "A lot of this album was made from the energy of the music we consumed [when we were young]: Led Zeppelin, Nirvana, Guns N' Roses. There's a whole slew of sampling from the smorgasbord we lived through," he concludes. "For once, we wanted to let that all out."