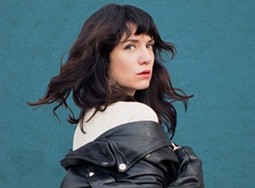 Born in South Carolina, alt-country singer-songwriter Nikki Lane grew up listening to a wide range of music. Because her parents were divorced, she lived in what she calls “separate worlds.”

“I grew up in a town outside of Greenville,” she says in a recent phone interview from her Nashville home. She performs at 8 p.m. on Tuesday, March 7, at the Beachland Ballroom. “

Because her parents were separated, she spent time with both of them and absorbed their disparate tastes in music.

"My mom listened to Motown and I did a lot of shagging, swing dancing, but not the dirty kind," she says. "My dad was a Datsun 280z driving dude. He would pop in 90s country cassettes. My grandfather was a big fan of mountain and dulcimer music. My range of taste has always been all over the place. My best friend only listened to Alabama and Marshall Tucker Band and Allman Bros. As I grew up, MTV was my babysitter and my nanny through middle school.”

She moved to California thinking that she would be an A&R rep for a major label and sign the next big rock or pop act.

“I was born in a decade when all the girls in my elementary school wanted to be marine biologists — things come in trends,” she says. “But I would watch That Thing You Do or Almost Famous and my takeaway was that I would be the cool girl who got to participate [and sign bands]. It turned out to be the complete opposite.”

But instead of wining and dining up-and-coming bands, she started designing shoes. For a few years after that, she tried her hand at a mix of things, including high-end retail. While in California, she also started writing snippets of songs while driving and would hum out melodies. She recorded them on cassettes.

“I got a four track,” she recalls. “I worked pretty hard but I would come home and start writing songs with a kid who worked at the coffee shop below my apartment. I was trying to emote something. Back then, I was writing songs with less strong melodies that floated on. I would get a little drunk and write songs about characters I had made up. It’s totally different than when I started focusing on songwriting and started writing about myself.”

Lane had written all of her first record, which never came out, by herself, but her manager encouraged her to take some pressure off herself and do some co-writing. The resulting album, 2011’s Walk of Shame, established Lane as an alt-country star-in-the-making.

Lane raised eyebrows with 2014’s All or Nothin’, a terrific collection of twangy tunes produced by Black Keys’ singer-guitarist Dan Auerbach, whom she met at a flea market. The album made several “Best of” lists when it came out last year. New West Records even released a 19-track deluxe version of the record, which includes the previously unreleased “Can’t Get Enough.”

“I didn’t consciously know who the Black Keys were,” she admits when asked about the Auerbach connection, adding that she sold him the leather jacket off her back. “I was deep in California ’60s country music. I didn’t know who he was, but I realized he did have a real job.”

The two struck up a friendship and did some co-writing on For All or Nothin'. A song like “Love’s on Fire” benefits from a sparse intro that leads into a beautiful duet. Another highlight, the rowdy “Sleep with a Stranger,” could pass as an Old 97s tune. Lane describes it as song about “getting married and getting divorced.” It comes off as the kind of song you’d stereotypically expect to hear from a guy rather than a woman. The deluxe version of the album features the ballad “Can’t Get Enough.”

Her latest effort, Highway Queen, picks up where All or Nothin’ leaves off.

“The album isn’t a concept album, but it started as a character who could survive all this touring,” she says of Highway Queen. “I also thought of it as a truck that I thought Ford or Dodge could make for me and that I could drive around all the time. I worked that idea up and the songs became little moments that triggered me to sit down and bang something out. They show the timeline of what’s been happening in my life. The road is all over the songs. It was just unavoidable.”