A lush soundscape of Rock Critic Jargon I will never use again. 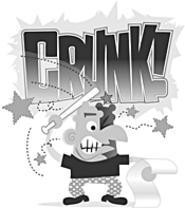 Next time you spot one of these doofuses at a party (riffling through the host's CD collection, pilfering all the Cheetos, sulking despondently in a darkened corner), ask him/her/me to describe a band, a song, a genre. Verbally. In actual, human, face-to-face conversation. Then prepare for an onslaught of meaningless nonsense. Like any other, this profession suffers from its own unique lexicon of ridiculous, impenetrable jargon. I am certainly not immune to this disease, nor can I suggest a foolproof cure. But perhaps I can diagnose specific viruses and prescribe medicine to -- lousy metaphors. (Gotta knock it off with the lousy metaphors, too.)

As we behold 2006's shimmering, hypnotic, melodic dawn, I pledge to you: Every word noted below, I will never use again after this week.

Angular: Frequently describes guitars that sound, well, pointy. Sharp, unpleasant, of or like Fugazi. As opposed to "circular," which is a whole other can of corn.

Can of Corn: Sorry.

Unlistenable: "I didn't listen to it."

Seminal: "I sold it back for $5 without listening to it, but then everyone else wrote about it, so I had to buy it back for $12 and pretend I liked it."

Rewards repeated listens: "Though I haven't yet listened to it, I assume it will be seminal."

Minimalist: Describes any song that does not employ a full string orchestra. "Hall & Oates' 'I Can't Go for That (No Can Do)' is a seminal, coruscating slab of minimalist pop."

Danceable: "I couldn't dance competently if my pants were on fire."

Radio-Ready: "This is the only song I remember."

Spits, as opposed to "raps" or "speaks": White white white.

Cerebral: Yes sir: Brian Eno is smarter than you.

Eclectic: "From polka to bluegrass to baile funk to death metal! It's a floor wax and a dessert topping!"

Wanton Hyphen Overuse: An ordinarily calm writer friend of mine flies into a rage whenever this technique is employed. Specifically, he refers to it as "I-can't-think-of-what-to-write-so-it's-time-to-just-say-'fuck-it'-and-hyphenate-the-shit-out-of-a-whole-mess-of-words-that-might-come- close-to-an-accurate-description-of-something-that-I-might-be-able-to-work-out-myself-if-I-read-real-books-instead-of-Spin-while-I- go-poo-poo." He'll be fine, honest.

_____ yet _____: Increasingly common. Angry Hyphen Guy particularly chafes at the "Retro Yet Futuristic" tag: "What -- like Barbarella?"

Wanton Capitalization Overuse: Such as, oh, say, Angry Hyphen Guy. I'm still enamored of this one too. Let's save it for '07.