Queens of the Stone Age's Josh Homme combats the stereotypes that linger from his Kyuss days. 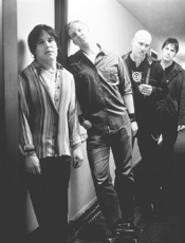 Queens of the Stone Age: The odd band out at Ozzfest.
Calling from Leeds, England, a town that will forever be associated with the Who's live album from 1970, singer-guitarist Josh Homme of the Queens of the Stone Age has two problems: He's getting soaked by what sounds like a downpour, and he desperately wants -- no, needs -- a cigarette.

"I'm cigarette-free and needing one very badly," says Homme after asking fellow Queens member Nick Oliveri for a "ciggie" to no avail. "I feel like I'm going cold turkey right now." Given that the Queens of the Stone Age are the leaders of the burgeoning stoner-rock movement, it would be more appropriate if Homme were jonesing for a joint. But, as he's the first to point out, the stoner-rock tag has been misapplied to his band -- you can take the drug references on "Feel Good Hit of the Summer," the opening track on the Queens' new album, Rated R, as an elaborate joke. In the song's refrain, Homme chants, "Nicotine, Valium, Vicadan, marijuana, Ecstasy, and alcohol," and he's fully cognizant of the fact that he's feeding the stoner-rock association.

"I think ['Feel Good Hit'] is like a social experiment," he explains. "What do people do when you don't swear at them, but you say words that make them uncomfortable? Like some of these stoner-rock kids are going to be going, 'Yeah, stoner rock. Here we are!' and their parents are going to hate them. The best analogy I can make is pro wrestling. Is it real or is it fake? Is it someone fucking with you, or is it people actually doing backflips and slamming you on the ground? And I think the line is blurred, and it's more up to the court of public opinion. I mean, is there a chance that I'm sitting on a really high hill, firing arrows into the balloon of stoner rock? Yeah, it's a very good chance. Is there a chance that I've done all of that stuff in my lifetime or all in one day? Yeah, there's a chance of that, too. But, I mean, it's really just a list. The only thing that falls into the true boneheaded, dumbed-down sort of attitude of stoner rock is 'Feel Good Hit of the Summer,' and I can't help but think that the writers of that song were probably fucking with somebody. And I think it's up to the people to either get really mad over it or rally around it like a cheerleaders' chant."

Homme first came into prominence on the indie circuit with Kyuss, the Palm Desert, California band that would have put stoner rock on the map had the term existed back then. During the first half of the '90s, Kyuss ruled the underground hard rock scene, putting out several albums, including 1992's terrific Blues for the Red Sun. A heavy band that used bombastic riffs and fuzzed-out feedback, Kyuss arguably started the movement that was then picked up by bands such as Fu Manchu, Monster Magnet, and Nebula.

After years of internal strife, the group disbanded in 1995. Homme moved to Seattle, briefly joined the Screaming Trees, and eventually reunited with former Kyuss bassist Nick Oliveri. Initially, former Kyuss drummer Alfredo Hernandez joined the Queens, but has since left, and for Rated R, the band used studio drummers Gene Troutman and Nicky Lucero. Fittingly, the term Queens of the Stone Age came from a friend of Homme's, who used it to describe Kyuss. ("Man, you guys are the fucking queens of the stone age, man," says Homme in imitation, using his best Jeff Spicoli voice to duplicate his friend's pronouncement. "You're so heavy, man.")

"If you want to put Kyuss in there [as stoner rock], that's fine," concedes Homme. "But that tag was created after the band was over, so it doesn't apply. And then Queens is far from stoner rock."

Rich in diversity, Rated R keeps the heavy jamming to a minimum and places the focus on jazzy, high-pitched trumpets ("I Think I Lost My Headache") and mesmerizing grooves ("Better Living Through Chemistry"). Despite the occasional forays into dissonance, Rated R is surprisingly accessible, and the band's willingness to embrace the festival circuit, specifically Ozzfest 2000, has some of its die-hard fans doubting its integrity. A recent visit to the bulletin board on the Queens site proved insightful: One fan eloquently wrote that the band isn't a metal act and shouldn't pretend to be. Homme takes the criticism in stride.

Invariably, Ozzfest 2000 will give the Queens the exposure Kyuss never experienced. The Queens have already generated more press than Kyuss did throughout its entire career. But to hear Homme discuss his former band makes one wonder what, if any, musical differences there are between the two bands.

"I think [the Queens] are a different version of the same idea," says Homme. "Kyuss felt it had musical freedom within the heaviness. And I think that Queens just feels like it has musical freedom, and that heaviness need not be the focal point as well. In Kyuss, we had set rules that we imposed on ourselves. And I enjoyed that. And when it became evident that I might not be able to enjoy it anymore, I just had to quit, instead of letting it get bad or something that is upsetting. It was more like 'Whoa, that was awesome. Now what are we going to do?' For me, the answer to that was I need less rules. I need to be able to change at will, but still keep it under the umbrella of a sound, so I don't lose everybody."