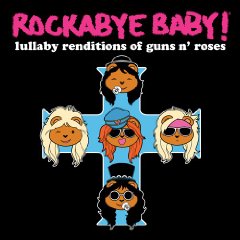 A copy of Rockabye Baby! Lullabye Renditions of Guns N' Roses just landed on my desk.

And yes, "Mr. Brownstone" — a song about how cool heroin is — is on there.

What the fuck are these people thinking? The Rockabye Baby series turns familiar pop and rock tunes into kid-friendly lullabies. It's supposed to be a way for "cool" parents to turn their kids on to good music (instead of having them listen to the crap that passes for children's music).

In theory, it's not really a good idea. Why not just let your kids hear the Beatles, the Beach Boys and U2? Do they really need to listen to these — as Rockabye refers to its releases — "blanket-soft lullabies"?

In practice, it's an even worse idea. Some of the releases have been curios for music fans. Radiohead, Pink Floyd and even Coldplay made for some interesting, if not exactly enjoyable, listens.

But the Metallica, Ramones, Nirvana and Led Zeppelin outings showed just how ill-advised this whole series is.

Yet none of the past releases can prepare you for the GNR album, which comes out on November 10.

Songs include "Welcome to the Jungle" (about how Los Angeles turns everyone who goes there into sluts and junkies), "Paradise City" (about a mythical land where girls get naked, and the booze and drugs flow freely) and "Mr. Brownstone" (about heroin addiction sung from the point of view of someone who sees nothing wrong with shooting thousands of dollars worth of soul- and life-sucking junk into their veins).