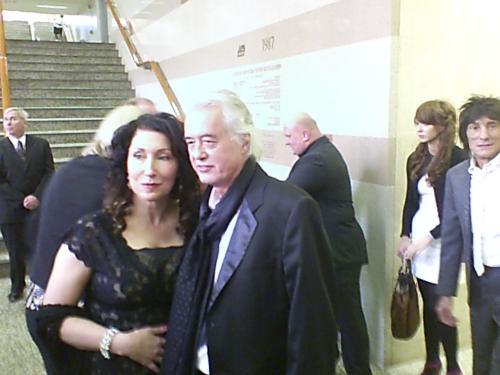 Sat outside the red carpet to watch the celebs pour into Public Hall for the Rock Hall Inductions. It was hard to see much of anything, as a canopy extended up to the sidewalk and the limos and shuttles pulled right up to the front of it. But that said, we did see Jimmy Page enter the venue and the Stones’ Ron Wood was right behind him.

Mayor Frank Jackson took a moment to wave the crowd of about 100 that stood outside, snapping photos and looking to see if anyone they recognized came through. Run DMC’s Rev. Run also waved to the audience as he
walked along the red carpet stopping to talk to people along the way. Inductees Wanda Jackson, Little Anthony and Bobby Womack all came through the red carpet.

Camera crews lined the sidewalks and traffic slowly crawled along with fans shouting out to the people they
recognized. Members of Metallica arrived in separate limos before hustling inside. In Public Hall, inductees and presenters mingled at a cocktail party before heading into Public Hall for the dinner (herb-crusted tenderloin of beef and tender airline chicken breast) that preceded the awards. —Jeff Niesel