Plus Boy George, The Get Up Kids, Gary Clark Jr. 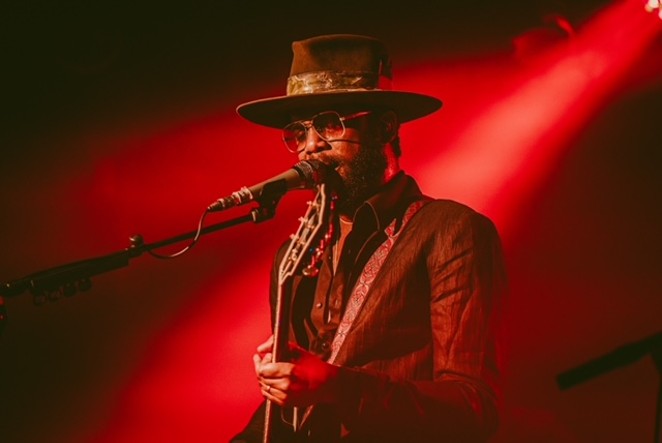 Duane Betts
Singer-guitarist Duane Betts got his start as a teenager sitting in with Rock Hall inductees the Allman Brothers Band before relocating to Southern California to lead bands such as Backbone69 and Whitestarr. Betts also spent nearly a decade playing guitar alongside his father, Dickey Betts, in Great Southern. He’s even been the touring guitarist for folk-rockers Dawes and a member of the supergroup Jamtown. In 2018, he released his debut, Sketches of American Music, and toured as a guest of the Devon Allman Project. That same year, Betts announced the formation of the Allman Betts Band with Devon Allman and Berry D. Oakley, son of the late Berry Oakley, founding bassist of the Allman Brothers Band. Currently, Betts is prepping a second solo album, and he brings his Dog Daze Acoustic Tour to the Kent Stage tonight at 8.
175 E. Main St., Kent, 330-677-5005, kentstage.org.

Jimmy Eat World
Emo rockers Jimmy Eat World kick off a fall tour with a performance tonight at 8 at the Rock Hall. Following the Surviving the Truth tour that took place with Dashboard Confessional earlier this year, the Something Loud Tour will continue for three weeks after tonight's kick-off show. The band's commercial breakthrough came some 20 years ago with the release of several singles from the Bleed American album with the infectious “The Middle” hitting No. 1 on the Billboard Alternative Airplay chart. In 2019, the band released its tenth album, Surviving.
1100 Rock and Roll Blvd., 216-515-8444, rockhall.com.

The Black Keys
Given that the Black Keys originally formed in Akron and played their first-ever show in Cleveland, it's always a cause for celebration when the band returns to Northeast Ohio. Singer-guitarist Dan Auerbach and drummer Patrick Carney recorded much of the material for their new album, Dropout Boogie, another compelling collection of blues-rock tunes, on the first take. Tonight's concert begins at 7 at Blossom.
1145 W. Steels Corners Rd., Cuyahoga Falls, 216-231-1111, livenation.com.

Jimmy Carter
A member of the Blind Boys of Alabama for 40 years and has sung for three presidents, won five Grammy Awards, been inducted into the Gospel Music Hall of Fame, and collaborated with the likes of Willie Nelson, Marc Cohn, Ben Harper, Peter Gabriel, Mavis Staples and Robert Randolph. He comes to the Kent Stage tonight at 6:30. Tickets start at $30.
175 E. Main St., Kent, 330-677-5005, kentstage.org.

An Evening with Al DiMeola
A prolific composer, Al DiMeola has released more than 30 albums as a leader while collaborating on a dozen or so others with the likes of Return to Forever (with Chick Corea, Stanley Clarke and Lenny White), Acoustic Guitar Trio and Jean-Luc Ponty. The talented jazz fusion guitarist comes to the Kent Stage tonight at 8. Tickets start at $48.
175 E. Main St., Kent, 330-677-5005, kentstage.org.

Gary Clark Jr.
Gary Clark Jr. exploded out of Austin, Texas, winning pretty much every award at SXSW in 2012 and then nabbing a Grammy for Best Traditional R&B Performance. Clark Jr., who portrays American blues singer-songwriter Arthur “Big Boy” Crudup in Baz Luhrmann’s new film, Elvis, has been plenty busy lately. In addition to sustaining a career as a terrific blues/rock guitarist, he recently served as served as the official Music Director for Jon Stewart’s acceptance of the 23rd Annual Mark Twain Prize for American Humor in the Kennedy Center Concert Hall. At work on his fourth full-length, Clark Jr. will perform tonight at 8 at MGM Northfield Park — Center Stage.
10705 Northfield Rd., Northfield, 330-908-7793, mgmnorthfieldpark.mgmresorts.com.

The Dream Syndicate
The Dream Syndicate singer-guitarist Steve Wynn discovered punk rock and garage rock when he was in college. So when he came back home to Los Angeles, he decided to form a band that would combine those two loves. Sounding like a cross between the Velvet Underground and Television, the band’s 1982 debut, Days of Wine and Roses, resonated with rock critics and fanatics alike. The band would eventually sign with a major label before calling it quits in 1988. The reconstituted group comes to the Grog Shop to mark the 40th anniversary of the album and will play it in its entirety. The concert begins at 8 p.m.
2785 Euclid Heights Blvd., 216-321-5588, grogshop.gs.

Boy George & Culture Club
This popular group scored seven straight Top Ten hits in the U.K. and six Top Ten singles in the U.S. with tunes such as "Do You Really Want to Hurt Me," "Time (Clock of the Heart)," "I'll Tumble 4 Ya," "Church of the Poison Mind," "Karma Chameleon," "Miss Me Blind" and "It's a Miracle." It performs tonight at 8 at MGM Northfield Park — Center Stage.
10705 Northfield Rd., Northfield, 330-908-7793, mgmnorthfieldpark.mgmresorts.com.

Dirty Honey
The up-and-coming rock band Dirty Honey rolls into House of Blues tonight with fellow Los Angeles-based rock band Dorothy and Detroit rockers Mac Saturn. Dirty Honey's single "When I'm Gone" suggests the band owes a debt to both AC/DC and Black Crowes, both of whom it channels in the hard rocking tune. The show starts at 6:30. Consult the club's website for more info.
308 Euclid Ave., 216-523-2583, houseofblues.com.

Tenacious D
Tenacious D — Jack Black and Kyle Gass — will celebrate the 20th anniversary of their platinum-certified self-titled debut, which came out in September of 2001. The comedic duo writes tongue-in-cheek rock songs that explicitly act as heavy metal parodies even if they're good songs in their own right. The concert begins at 8 tonight at Blossom.
1145 W. Steels Corners Rd., Cuyahoga Falls, 216-231-1111, livenation.com.

Big Sandy & His Fly-Rite Boys
Since he started performing with his backing band, the Fly-Rite Boys, some 30 years ago, singer-guitarist Big Sandy has continually attracted new young fans and introduced them to Western swing and rockabilly. Sandy recently released an album of old tunes that he's rearranged into acoustic instrumentals. His music, which recalls the type of music that was popular decades ago, has an easygoing vibe that appeals to fans of traditional country and rockabilly alike. He's been playing Cleveland for years and always puts on a good show. He performs tonight at 8 at the Beachland Tavern. Tickets cost $15 in advance, $18 at the door.
15711 Waterloo Rd., 216-383-1124, beachlandballroom.com.

The Get Up Kids
The Get Up Kids first got together in 1995 and the band was a major player in the mid-'90s emo scene, along with Green Day and Weezer. After signing to Vagrant Records in 1999, the band released Something to Write Home About. The album was a massive success and single-handedly made Vagrant Records one of the top independent labels in the country. Since then, the Get Up Kids have been a major influence on bands like Blink-182, Fall Out Boy and Hellogoodbye. The group brings its 25th anniversary tour to the Grog Shop tonight. The concert begins at 8:30.
2785 Euclid Heights Blvd., Cleveland Heights, 216-321-5588, grogshop.gs.

glaive
This 17-year-old indie rock artist’s three EPs to date — cypress grove, all dogs go to heaven (plus its deluxe edition old dog, new tricks) and then i’ll be happy with ericdoa— have received widespread critical acclaim. Most recently, he released the jittery single "minnesota" and collaborated with Machine Gun Kelly on “more than life.” He performs at 8 tonight at the Beachland Ballroom. Tickets cost $25.
15711 Waterloo Rd., 216-383-1124, beachlandballroom.com.