Livewire: Red Wanting Blue, the Grog Shop's Free Weekend, and the Best Concerts to Catch in Cleveland Through Early January

Go see some real music in the real world 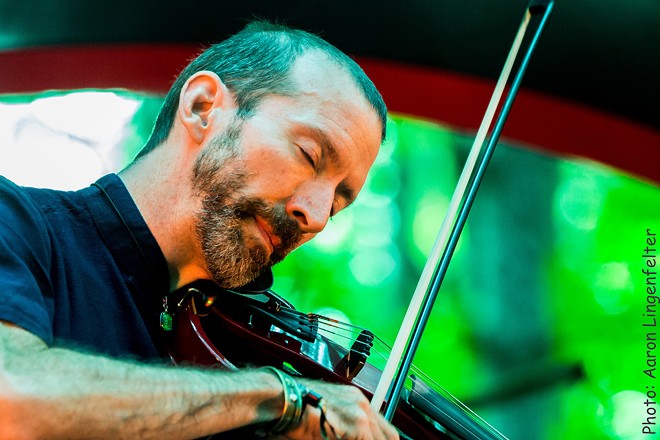 Arlo McKinley
Earlier this year, in advance of the release of his new album, This Mess We’re In, singer-songwriter Arlo McKinley jetted off to Europe, where he played in eight different countries in the span of about three weeks. The recent European tour signifies the way McKinley’s profile has risen, but it certainly hasn’t been an easy climb. McKinley initially began singing with his Baptist church when he was 8. He then started playing in punk bands when he became a teenager. Introspective singer-songwriters such as Nick Cave and Nick Drake inspired This Mess We're In, a terrific album that distills all of McKinley's disparate influences. Buffalo Wabs and the Price Hill Hustle share the bill with him tonight at the Beachland Ballroom. Doors open at 7 p.m.
15711 Waterloo Rd., 216-383-1124, beachlandballroom.com.

The Nick Moss Band Featuring Dennis Gruenling
After the 2018 release of their Alligator debut, the Nick Moss Band toured relentlessly. In the past two years, the band, which often tours and records with harp player Dennis Gruenling, has received five Blues Music Awards, including nods for Band of the Year, Song of the Year, Traditional Blues Album of the Year, Traditional Blues Male Artist and Instrumentalist—Harmonica. It comes to the Beachland Tavern tonight at 8.
15711 Waterloo Rd., 216-383-1124, beachlandballroom.com.

Dixon's Violin
A former symphony violinist, Dixon now improvises on a five-string electric violin with a looping system he developed to create an all-live one-man symphony that's "guided by his remarkable personal story of life transformation," as it's put in a press release. He performs tonight at 8 at Music Box Supper Club.
1148 Main Ave., 216-242-1250, musicboxcle.com.

Trans-Siberian Orchestra
This year’s Trans-Siberian Orchestra tour will feature an updated presentation of Ghosts of Christmas Eve. The second set will feature an assortment of other TSO hits. Expect the usual quotient of lasers and pyro during the highly theatrical performance. Performances take place at 3 and 7:30 p.m. today at Rocket Mortgage FieldHouse.
One Center Court, 216-420-2000, rocketmortgagefieldhouse.com.

Tropidelic & Friends
The local group warms up for tomorrow's NYE show at House of Blues with this show that takes place at the Beachland Ballroom. The veteran reggae act Passafire opens. The concert begins at 7 p.m.
15711 Waterloo Rd., 216-383-1124, beachlandballroom.com.

Red Wanting Blue
The Columbus-based rock band plays its annual NYE show in Northeast Ohio tonight at 9 at the Goodyear Theater in Akron. JD Eicher and Angela Perley open the show. Expect to hear RWB's hard-driving new single, “Hey, ’84,” as well as tunes from its extensive career that dates back to the late '90s.
1201 East Market St., Akron, goodyeartheater.com.

The Menzingers
For this tour that swings into House of Blues tonight, the pop-punk band will celebrate the tenth anniversary of its breakthrough album, On the Impossible Past, by playing the LP from start to finish. Songs such as “Gates,” a track that opens with nothing more than a brittle guitar riff as it builds slowly, and the droning title track feature poetic lyrics that show off the band’s sensitive side. Both tunes hold up well. After playing the album in its entirety, it will then play a mix of other tunes, old and new. The show starts at 7.
308 Euclid Ave., 216-523-2583, houseofblues.com.

Grog Shop Free Weekend with Apostle Jones/Grav/Plinko
Each year at about this time, the Grog Shop opens its doors for free to let the public take in some of Cleveland's best independent bands. The weekend of free shows kicks off tonight at 8 with a performance by Apostle Jones, the local funk/rock/soul act that puts on high-energy live shows. Grav and Plinko share the bill. The music starts at 8 p.m. and the free shows continue through Sunday.
2785 Euclid Heights Blvd., Cleveland Heights, 216-321-5588, grogshop.gs.

Gimme Gimme Disco
Taking its name from an ABBA song, this tribute to the Swedish pop band performs tonight at 8 at House of Blues. Expect to hear saccharine tunes such as "S.O.S.," "Dancing Queen" and "The Winner Takes It All."
308 Euclid Ave., 216-523-2583, houseofblues.com.

Into the Blue: Grateful Dead Revival
Regardless of your take on the Grateful Dead, the band to which Into the Blue, an ensemble of local musicians pays tribute, the group maintains a damn important stature in the rock 'n' roll canon. Into the Blue revives that spirit and lends it the respect Jerry and Co. rightfully deserve. Anyone interested in hearing — and seeing — great music flow from the stage should check out what these guys are doing. Fellow musicians and artists will glean inspiration. The show begins tonight at 8 at the Beachland Ballroom.
15711 Waterloo Rd., 216-383-1124, beachlandballroom.com.

Televisionaries
This group out of Rochester, NY has opened for the likes of Nick Lowe, Southern Culture on the Skids, the 5.6.7.8’s, Bloodshot Bill, the Fleshtones, Daddy Long Legs, Robert Gordon, and Big Sandy & His Fly-Rite Boys. It comes to the Beachland Tavern tonight at 8 in support of its new album, Mad About You.
15711 Waterloo Rd., 216-383-1124, beachlandballroom.com.

Wish You Were Here
For 17 years now, Wish You Were Here, the locally based Pink Floyd tribute act that started way the hell back in 1995, has put on a special holiday show. Usually, the guys adopt some kind of theme for the gig, and this year is no different as the group will play a mix of Floyd classics and obscurities at tonight's show. The concert begins at 7 at the Agora.
5000 Euclid Ave., 216-881-2221, agoracleveland.com.

Albert Lee Band
Guitarist Albert Lee, who reportedly left school at age 16 to pursue a career in music, played in a number of bands in the 1960s. One group, Heads Hands & Feet, took off and helped establish Lee as a pioneering player. Guitarist Eric Clapton once described him as "the greatest guitarist in the world." Find out why when the 78-year-old Lee and his backing band perform at 7 tonight at Music Box Supper Club.
1148 Main Ave., 216-242-1250, musicboxcle.com.