Real music in the real world 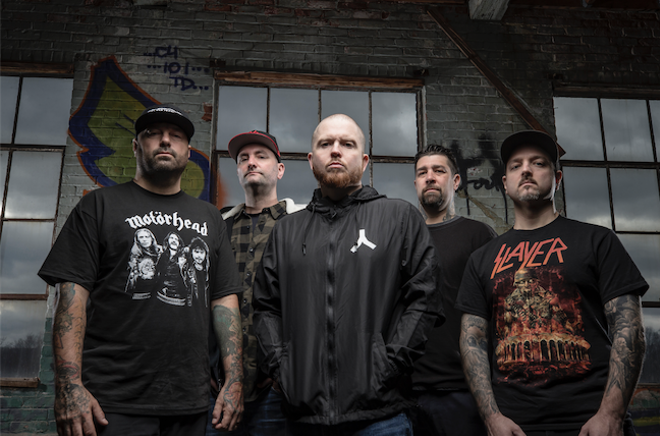 The Airborne Toxic Event
Known for its sweeping anthems that recall the likes of Bruce Springsteen and U2, Airborne Toxic Event initially formed as a stripped-down two-piece featuring singer Mikel Jollett and drummer Daren Taylor. The lineup has morphed over the years, but Jollett remains a constant. On tour in support of 2020's Hollywood Park, the band plays tonight at 7 at House of Blues.
308 Euclid Ave., 216-523-2583, houseofblues.com.

Jonah Koslen, Tommy Dobeck, and Daniel Pecchio
Jonah Koslen, Tommy Dobeck, and Daniel Pecchio — three original Michael Stanley Band members — have gotten together to play the Kent Stag. This is the first time all three have been on stage for a concert since the classic MSB Stagepass album was released in 1977. They are only playing songs from their first three MSB albums and sharing stories about that era. The band plays tonight and tomorrow night at 7.
175 E. Main St., Kent, 330-677-5005, kentstage.org.

Marcus King
This 26-year-old Grammy-nominated songwriter and guitarist worked with Dan Auerbach of the Black Keys on his latest effort, Young Blood, a riveting collection of rock and blues numbers. King performs tonight at 6 at the Agora. Neil Francis and Ashland Craft open.
5000 Euclid Ave., 216-881-2221, agoracleveland.com.

Pinkshift
This indie rock act comes to Mahall's 20 Lanes in Lakewood tonight as it tours in support of its debut album Love Me Forever, which was recorded by Will Yip (Turnstile, Mannequin Pussy, the Wonder Years, Circa Survive, Tigers Jaw). The concert begins at 7, and tickets cost $16.
13200 Madison Ave., Lakewood, 216-521-3280, mahalls20lanes.com.

Martin Sexton/Dan Hubbard
The word prolific is often thrown around when talking about singer-songwriters, but with Martin Sexton, it’s no exaggeration. He got his start in Boston, playing open mics and busking in subways and on street corners. He’s released numerous albums, received awards for his music and reaped praise from the likes of John Mayer and Dave Matthews. Sexton’s music is difficult to categorize due to his fusion of country, soul, folk rock, gospel, jazz and other genres, but he blends them all seamlessly. He performs tonight at 8 at the Kent Stage. Tickets cost $33.
175 E. Main St., Kent, 330-677-5005, kentstage.org.

NNAMDÏ
A mainstay in the indie-community for years, especially in Chicago where he was named a Chicagoan of the year in 2020 by the Tribune, NNAMDÏ has toured with Wilco and counts Kacey Musgraves, Jeff Rosenstock, Danny Brown, Moses and Sumney as fans. He performs tonight at 7 at Mahall's 20 Lanes.
13200 Madison Ave., Lakewood, 216-521-3280, mahalls20lanes.com.

Jonathan Richman
Perhaps best known from his role as the troubadour in the quirky ’90s comedy There’s Something About Mary, Jonathan Richman has a career that stretches back decades. He famously led the proto-punk band the Modern Lovers in the 1970s. Since then, he’s embraced the singer-songwriter role and often plays live while accompanied only by drummer Tommy Larkins. Richman and Larkins will perform tonight at the TempleLive Cleveland in a show presented by the Grog Shop. Tickets cost $22 in advance, $25 the day of the show.
3615 Euclid Blvd., grogshop.gs.

American Authors
As a fun twist this rock band just released six different versions of "Blind for Love," the first track from its forthcoming fourth studio album. There's a piano version, an acoustic version, a sped-up version and more. With its percolating handclaps and caterwauling vocals, the tune shows off the group's sharp pop sensibilities. Expect to hear it when the band plays tonight at 8 at the Beachland Ballroom. Madeline Finn opens the show.
15711 Waterloo Rd., 216-383-1124, beachlandballroom.com.

Mushroomhead
The pandemic put Mushroomhead's annual Halloween concert on hold, but now the veteran local band is back at the Agora to keep the tradition alive. Half Raised Heathens and Bittersweet Revenge open the show. Doors are at 6:30 p.m.
5000 Euclid Ave., 216-881-2221, agoracleveland.com.

Smashing Pumpkins
This tour featuring the '90s acts Smashing Pumpkins and Jane's Addiction arrives in town tonight for a stop at Rocket Mortgage FieldHouse. Founded in Chicago in 1988, the Pumpkins draw from rock, pop, shoe-gaze, metal, goth, psychedelia, and electronic. The band has sold more 30 million albums worldwide and collected two Grammy awards. In 2020, the group released its 11th full-length album and latest double album, CYR. More new music is slated to come out this year. The concert begins at 6:30.
1 Center Court, 216-420-2000, rocketmortgagefieldhouse.com.

Eliza & the Delusionals
Written by Eliza Klatt and Kurt Skuse with added writing credits from acclaimed songwriters/producers in Sarah Aarons (Zedd, The Rubens, Childish Gambino), John Hill (Cage the Elephant, Charli XCX, Lykke Li) and Keith Harris (Madonna, the Black Eyed Peas), Now and Then, the latest effort from Aussie rockers Liza & the Delusionals, is a properly international effort. Sessions took place between Australia’s East Coast and Los Angeles. A tune like "Save Me" features lilting vocals and indie pop harmonies that hearken back to the days of Throwing Muses and Veruca Salt. The group performs tonight at 8 at the Grog Shop.
2785 Euclid Heights Blvd., Cleveland Heights, 216-321-5588, grogshop.gs.

The Wood Brothers
Celebrating the release of their seventh studio album, Kingdom in my Mind, a live audio-to-tape session, the Wood Brothers perform tonight at 7:30 at the Kent Stage. Kingdom follows the band's most recent studio release, 2018’s One Drop of Truth, which hit No. 1 on the Billboard Heatseekers Chart and gave the band its first Grammy nod for Best Americana Album.
175 E. Main St., Kent, 330-677-5005, kentstage.org.