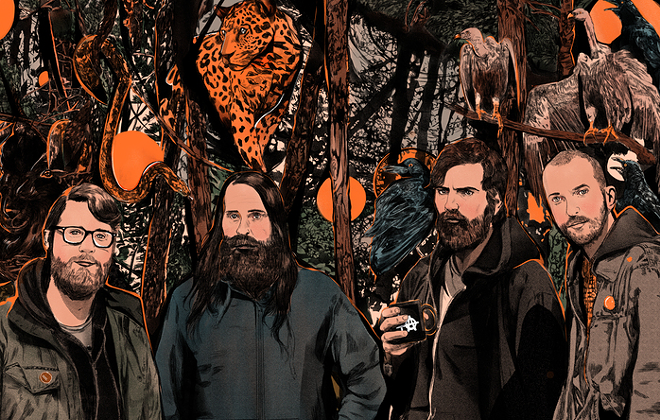 Blackberry Smoke
Dipping into different genres is something that Blackberry Smoke singer-guitarist Charlie Starr, who grew up in the Atlanta area, has done ever since he first picked up a guitar when he was a kid. Released in 2013, Blackberry Smoke’s The Whippoorwill, is a great collection of Southern rock-inspired tunes that show off Starr's consummate songwriting chops. The band's been dubbed "the new face of blue-collar Southern rock" — something that sits well with Starr. The title track is a terrific jam that Starr wrote about his late grandmother. The Southern rock band's current tour celebrates the tenth anniversary of the album. The group performs tonight at 7 at Masonic Cleveland.
3615 Euclid Ave., 216-881-6350, masoniccleveland.com.

The Killers
Formed in Las Vegas by charismatic singer-keyboardist-bassist Brandon Flowers, the Killers quickly ascended to pop stardom thanks to hits such as “Mr. Brightside” and “Somebody Told Me.” The band’s latest album, Pressure Machine, comes off as a far more introspective affair right from the somber opening tune, “West Hills,” a ballad that features strings and sounds a bit like a dreary Nick Cave number. The group performs tonight at 7:30 at the Wolstein Center.
2000 Prospect Ave., 216-687-9292, wolsteincenter.com.

Southern Culture on the Skids
Formed nearly 40 years in Chapel Hill, Southern Culture on the Skids plays a mix of country and rockabilly tunes. Known to throw out chicken wings while performing on stage, the group returns to the Beachland Ballroom tonight with openers Jon Spencer & the HITmakers. The show starts at 8 p.m., and tickets cost $20 in advance, $25 at the door.
15711 Waterloo Rd., 216-383-1124, beachlandballroom.com.

Wynton Marsalis
The 2022-2023 Tri-C Performing Arts series will open with a performance by jazz great Wynton Marsalis, who’ll perform in Cleveland for the first time since 2015. Marsalis currently serves as managing and artistic director of Jazz at Lincoln Center and has amassed an unrivaled number of awards and accolades, including nine Grammys and the Pulitzer Prize for Music — the first ever awarded to a jazz artist. Since 1988, he has led the Jazz at Lincoln Center Orchestra. The concert begins at 8 tonight at Tri-C's main auditorium on its Metro campus.
2900 Community College Ave., tri-c.edu.

KMFDM
Performing in the States for the first time since 2017 (as far as we know), this German industrial rock has decades of touring and recording under its belt. Its latest album, the just-released Hyena, features more of the grinding synth- and percussion-driven rock for which the group is known. Album opener “All 4 1” careens with a real sense of intensity, and the group experiments with hip-hop on the surprisingly soulful “Rock ’N’ Roll Monster.” The group performs tonight at 7 at the Agora.
5000 Euclid Ave., 216-881-2221, agoracleveland.com.

Of Montreal
When singer-songwriter Kevin Barnes, a Rocky River native who still thinks of himself as a lifelong fan of Cleveland sports teams, moved to Athens, Ga. some 25 years ago, he consciously wanted to embrace the city's rich musical history. Inspired by watching Athens, Ga. Inside/Out, a documentary film about the music scene that featured performances and interviews with acts such as R.E.M., Pylon and the Flat Duo Jets, he sought out the kind of camaraderie he lacked in previous bands and formed Of Montreal. He’s steadily toured and released albums ever since; the band’s latest effort, Freewave Lucifer fck, is as weird and eccentric as ever. The indie rock band is back at the Beachland Ballroom tonight at 8. Tickets cost $20 in advance, of $22 at the door.
15711 Waterloo Rd., 216-383-1124, beachlandballroom.com.

Stephan Crump
Echo Award-winning bassist/composer Stephan Crump has released 12 albums in addition to numerous film scoring contributions. In his solo performances, he explores his "unique musical language" through an expansive range of sounds he achieves on the acoustic bass. Tonight's show begins at 7 at the Bop Stop. Tickets cost $20.
2920 Detroit Ave., 216-771-6551, themusicsettlement.org.

əkoostik hookah
Formed in 1991, the Ohio-based jam band ekoostik hookah has achieved success and longevity largely without the support of mainstream media, corporate management, or even a record label. The veteran Ohio-based jam band that plays everything from folk and psychedelic rock to bluegrass and blues performs tonight at 8 at the Kent Stage. Tickets cost $20.
175 E. Main St., Kent, 330-677-5005, kentstage.org.

Southside Johnny & the Asbury Jukes
Longtime friends with both Little Steven (a founding member of the Jukes) and Bruce Springsteen, Southside Johnny has released more than 30 albums in a career that stretches back to the early ’70s. A Cleveland favorite, the guy has fond memories of the days when Kid Leo put him into the regular rotation on WMMS and always puts on an especially good show in Northeast Ohio. Tonight's concert begins at 8 p.m. at MGM Northfield Park — Center Stage.
10705 Northfield Rd., Northfield, mgmnorthfieldpark.mgmresorts.com.

Titus Andronicus
“(I’m) Screwed,” the first single from The Will To Live, the latest effort from conceptual indie rockers Titus Andronicus includes an official music video from director Ray Concepcion that finds the band performing on a flatbed truck during the Independence Day Parade in the band's hometown of Glen Rock, NJ. The track introduces the narrator of The Will To Live at the moment he realizes the walls are closing in. It’s heady stuff. Expect the group to perform it as well as tunes from a career that dates back nearly 15 years now. The band performs tonight at 7 at Mahall's. Tickets cost $20.
13200 Madison Ave., Lakewood, 216-521-3280, mahalls20lanes.com.

Dead Boys
This Cleveland punk band brings its reunion tour to the Beachland for a concert that takes place at 8 p.m. Original guitarist Cheetah Chrome and drummer Johnny Blitz lead the band. Expect to hear punk classics such as “Sonic Reducer” and “Ain’t Nothin’ To Do.” The Briefs and Suzi Moon open.
15711 Waterloo Rd., 216-383-1124, beachlandballroom.com.

No Age
This Los Angeles-based duo — drummer-vocalist Dean Spunt and guitarist Randy Randall — comes to the Grog Shop tonight at 8 as it tours in support of its new album, People Helping People! Droning tunes such as "Andy Helping Andy" suggests the band's esoteric approach. As a side note, the music video features a great pastiche of footage of Andy Warhol.
2785 Euclid Heights Blvd., Cleveland Heights, 216-321-5588, grogshop.gs.