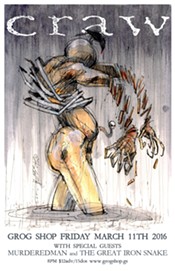 While the local hard rock act Craw never rose above cult status, it did have a strong local following and regularly played at the old Euclid Tavern, a stronghold for the heavy bands on Touch N Go, the influential Chicago label. The group possesses a distinct sound as it draws from underground metal and hardcore contemporaries of the late '80s and '90s, and the band’s music features cutting guitar tones, concussive drumming and atonal lyrics detailing what could only be described as “a neurotic perspective.”

The band takes inspiration from jazz, classical and modern music while maintaining the sonic lineage of punk, metal, classic prog rock and ’70s riff rock. This whirlwind of musical influence led to Craw’s unique position on the local scene.

“We fit into the Cleveland scene pretty well,” says bassist Zak Dieringer. “The rest of the world didn’t mesh with us. We weren’t aiming the music at the right audience. Younger, hardcore kids were into it, but we were aiming it at the Touch N Go Chicago scene. Cleveland has got weirder taste than most other places. It wasn’t out of place for us to play with Neurosis and then play with the Jesus Lizard.”

“Conceptually, we just wanted to make [our music] as hard and heavy as possible,” adds guitarist David McClelland. “Which sometimes meant making it as light and quiet as possible.”

In the wake of the recent reissue of the band’s first three albums, the group will play a reunion show at the Grog Shop. All members from all eras of the band will be participating. It will be the first Craw show with singer Joe McTighe since 2002, and the first time some of the guys have been onstage together since 1994.

The original members first met in the late '80s when Case Western students McClelland, Chris Apanius and Rockie Brockaway began jamming, eventually adding classmate Joe Tighe on vocals. Their first drummer, Laurie Davis, recorded some demo material with the band while she was studying at the Cleveland Institute of Art. After she left, she was replaced by Cleveland Institute of Music student Neil Chastain. Following the recording of Craw’s eponymous first album and the subsequent touring, Apanius and Chastain left the band and were replaced by bassist Zak Dieringer and drummer Will Scharf (of Keelhaul fame).

This lineup would be the backbone of the next two albums, Lost Nation Road and Map, Monitor, Surge. Those first three albums — all recorded with legendary engineer Steve Albini — have been out of print on CD “for about 8 million years,” according to drummer Will Scharf. They were never released on vinyl.

Two years ago, Hank Shteamer, a musician and writer out of Kansas City organized a Kickstarter campaign to bring craw’s first three records. Northern Spy, a Brooklyn record label, agreed to pick up the project and helped develop a 6-LP box set that includes Craw’s first three records on vinyl and an “exhaustive” 200-page book detailing the Craw story, complete with a timeline, lyrics, discography, bibliography and many photos.

“It is a box set, super high-quality limited vinyl pressing of the first 3 CDs. With a very fancy information book. Luxurious. It will shine your shoes,” Scharf quips.

The Grog Shop concert will present music from all four of Craw’s studio albums featuring former members Chris Apanius and Neil Chastain. McClelland also hints at a number of “surprises” throughout the evening.

In its earliest days, Craw was more of a Case Western band than a Cleveland band, regularly playing Cleveland Institute of Art parties, house shows near University Circle, and the Euclid Tavern. McClelland says the band didn’t take inspiration from the city’s decay.

“The post-industrial urban squalor and bitter winters of Cleveland led us to write tough, hard-edged music — this is kinda true," he says. "But then again Cleveland in the spring and summer is lovely and green, so not entirely true.”

In fact, many members of the band frequently felt inspired by the vibrant community of University Circle.

“Our ‘scene’ was really the amazing hybrid of math and science nerds, artists and musicians that was at University Circle at that moment in time. I've made this comparison before, but the University Circle area at the time was just one of those right time, right place moments that had a real 'Godel, Escher [and] Bach' vibe to it,” says Brockway, referencing the 1979 book by Douglas Hofstadter that’s about the nature of cognition. “There was an initial outlet in the Euclid Tavern that just all lent itself to the enhancement of the Cleveland underground and indie movements.”

“The Cinematheque at CIA was a huge influence — maybe not specifically musical, but we all saw lots of great films that we might otherwise have missed. And of course we were right next to CIA, and the Cleveland Museum [of Art], and the symphony — so the things we did for recreation (besides skateboarding) were usually centered around the arts.”

Which raises the question: did Craw fit in with the Cleveland hardcore scene of the '80s and '90s?

The answer is a convoluted no.

Although many members had connections to that scene (Chris Apanius’ brother, Matt, was in Hyper As Hell, Will Scharf’s Keelhaul bandmate, Chris Smith, played in Integrity) and attended a number of shows, their paths never truly crossed.

“[The Cleveland hardcore scene] was made up of kids who grew up in the area, and Craw was of course made up mostly of people from outside the area," says McClelland. "I think that part of the divide was that we were playing music to play music, and the social part of being in a band, although important, came second — and I got the feeling that the Cleveland hardcore folk had known each other since they were kids, so the social part of the scene was pretty important — and Craw was outside of that social scene."

Musically, Craw was dissimilar to many of the local heavyweights of that era, including Integrity, Ringworm, and 9 Shocks Terror. While maintaining a level of heaviness, Craw basked in its own unique sound and musical attitude.

“We didn't set out to be more or less weird than anyone — all that ‘weirdness’ comes naturally from writing music that's both challenging and exciting for us specifically,” McClelland says.

Despite nay-saying from Scharf (“the ultimate self-deprecator” according to McClelland) in a Noisey interview, many other bands have followed in craw’s innovative footsteps. Doom metal bands, such as Tombs and Bloody Panda, mathcore groups like Dillinger Escape Plan, and even heavy-alternative groups like Young Widows have all referenced the unique weirdness of Craw.

“I'm not sure if I can articulate it, but in my humble opinion lots of things central to both music and art can be dissected into numbers and math, so for me, a math guy, I was always attracted to challenging my own understanding and experience of music by writing outlier compositions,” says Brockway.

“If weirder means more confusing to most folks, and more alienating, then by all means, we were playing weirder shit," says Scharf. "We were the square peg.”