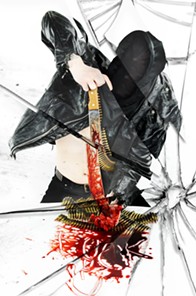 Jamie Walters (aka Athenar) originally played in the local metal band Boulder before forming Midnight more than 10 years ago.

Back in 2012, the band issued Complete and Total Hell, a compilation of its various EPs and splits up to and successive of 2011’s Satanic Royalty.

Now, the band has announced it will release Shox of Violence, an album featuring four new songs, on Feb. 20. The group will release it as a stand-alone 12-inch while the CD and tape versions will feature 25 tracks total, including a cover of Venom's "Too Loud (for the Crowd)" that was available exclusively to subscribers of Decibel magazine, several live tracks, and covers by Quiet Riot, Girlschool, the Pagans, Taipan and Crucifixion, among others.

“[It] looks to be a heck of a year for us,” says Walters in a press release. “[Shox of Violence] is a total basher. We're also doing a North American tour with Deutsche thrashers Kreator, who have a new album coming out called Extreme Aggression. Also on the bill are Obituary (formerly Xecutioner), who have a debut album being released entitled Slowly We Rot — sounds heavy! See you on the streets."

The sixth-annual Decibel Magazine Tour, the tour takes place this March and April and includes an April 9 date at the Agora.