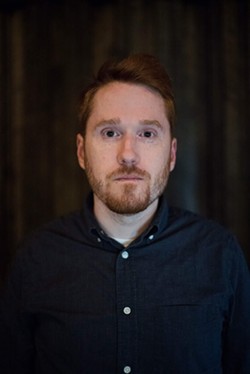 When the guys from the Lighthouse and the Whaler, one of the best indie rock bands in Northeast Ohio, walked into local producer Jim Stewart’s new recording studio on Superior Ave. in a space shared by the Tragic Hero Music Group, Crushtone Studio, and Jon Richey and Bill Demarco’s Vuture Visions Audio and Video, they immediately knew they wanted to record there. They cut their forthcoming album at the studio earlier this year.

“Lighthouse is one of the best known bands I’ve ever worked with,” says Stewart one recent afternoon as he gave us a tour of the newly remodeled space. “It’s a really cool record and seems like the natural progression for them. Their first album was pretty folksy and then they got into more electronic stuff. This seems like a nice blend. There are big open vocals and claps, all in a modern sort of way. It’s very cool.”

Stewart has become the go-to guy for local indie rock bands. The inspiration for learning how to record bands came from a personal experience. In the early 2000s, he played in what he jokingly refers to as a “shitty high school” band. After the group paid what Stewart says was “a lot of money” for a subpar recording, it motivated him to learn how to record his own damn band.

“At that point, I thought there has to be a better way and there have to be people who know what they’re doing,” he says, adding that he went to the School for Audio Recording and Music Production in Chillicothe in 2005 and enrolled in the school’s two-month program.

“It’s recording all day every day seven days a week,” he says. “The second week you’re there, you record a band. It’s really cool.”

He then worked as an intern at Metrosync, the studio once housed in the Agora (Lava Room has taken its place). Shady Living, the very first band he recorded there, featured guitarist Will Hooper, who now plays with local indie rockers Ottawa, a band with which Stewart continues to work.

“I could get my own bands in for cheap from midnight to 6 a.m.," he explains. "It started to slow down so me and the other guy would figure out what we wanted to learn. We would experiment with kick drum sounds. It was cool. It was time to experiment. If you put a microphone facing one way, we wanted to see how different it would sound if you put it facing another way. That’s the more traditional way of coming up with recording techniques rather than going to school and learning. I have a little bit of both.”

Metrosync shut down, and Stewart started freelancing at Ante Up, the studio where local hip-hop heroes Bone Thugs N Harmony have recorded. Studio owner Michael Seifert would eventually hire him and he worked with bands such as the now defunct This is a Shakedown and heavy hitters Ohio Sky. He worked there for two years and then transitioned into working on his own when Ante Up suddenly shut down.

“It was scary,” he says of that time period after Ante Up shuttered. “I didn’t have any gear. I had sold it off. There was a terrifying scramble. I did some odd jobs editing. I had a laptop and could do some work on it.”

He made a deal to track projects at Lava Room, so he could use the facility to fine-tune the music he recorded at his Ohio City apartment.

“At my apartment, I would do vocals and put them in my bedroom,” he says. “I had to turn off the heater in the winter because it was so loud. It would be freezing when we were trying to record.”

In November of 2015, he moved into Crushtone Studios after locally based producer Jim Wirt invited him to build a studio in the enormous warehouse where he worked. While there, Stewart worked with over 50 different artists.

“I think there was some excitement that I finally got a proper space,” he says when asked about why so many bands gravitated to the space. “It has a cool vibe. It had a downtown view, and drums sounded really great. It set up what I wanted to do.”

He says that bands were really supportive when he had to move down the street into the studio where he now works.

“Everyone I’ve brought in here really likes it,” he says of the current space. “It’s more of a proper space. There’s more isolation. In the old space, if someone was doing drums, no one else was working because they were so loud. It wasn’t really a drum room but just an open space. This space is more isolated and properly built. All the walls are floated.”

Stewart says he understands that many bands want to record themselves but says he still has something to offer.

“I can take the technical aspect out of it, so they don’t have to worry about why their microphone isn’t working. There’s no extraneous noise here. There aren’t distractions here.”

Stewart says he hopes that Cleveland becomes a “destination” for studios and audio engineers and that bands from outside of town will want to come to the city to record.

Jeff has been covering the Cleveland music scene for more than 20 years now. And on a regular basis, he tries to talk to whatever big acts are coming through town, too. If you're in a band that he needs to hear, email him at [email protected]cene.com.
Scroll to read more Music News articles