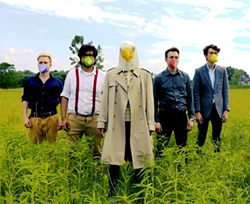 A four-piece rock/alternative band, locals Who Hit Me have played around town for more than two years now with acts such as Dune Rats, Radkey and Dinosaur Pile Up.

“We've met a lot of great people in the community and love being part of it,” says drummer Rex Larkman.

The group has just produced a music video for the new song "All I Wanna Be.” It recorded the track at Lava Room Recording with Austin McMaken as the engineer. It also enlisted locally based Adam Boose at Cauliflower Audio to master the sound.

“We did the production of the music video ourselves,” says Larkman. “All four members played roles in the acting and our friend Andrew Yadon from the band Sweepyheads filled in as the birdman. Andrew, Rex, Natalie Larkman, Natalie Lichtman, and Rachel Matonis did the cinematography and Rex edited the video.”