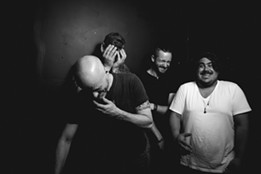 Several years ago, the local hardcore group Above This Fire played its first-ever show with the post-punk act Thursday at the old Blind Lemon (now the Foundry). From that point on, the band became a major player on the local punk and hardcore scene.

Now, the group has just announced that its new self-titled album will arrive on July 22 on its own Forest City Records imprint. Local graphic artist Derek Hess created the cover artwork.

"We approached this record with no set expectations or unnecessary constraints,” says guitarist LT Magnotto. “Our goal was to write songs we'd want to listen to and love playing live. This record feels like a new beginning. That's why we thought the best possible title of it is simply Above This Fire.”

The vinyl can be preordered here, and the band just released a music video for the noisy first single, "Counterfeit Blueprints."