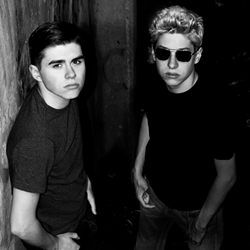 Norton Records
Archie and the Bunkers, a local group featuring teenage brothers Emmett and Cullen O'Connor, formed five years and has gradually picked up steam ever since.

It's legitimately now become a national act and has released a number of albums through the UK imprint Dirty Water Records.

The group has even toured Europe on a couple of occasions.

To celebrate the release of their new single, "The Traveler"/"Looking," the brothers will play a special release party at 8 p.m. on Friday, Feb. 23, at the Beachland Tavern.

The release marks their debut on the stateside Norton Records. A few years back, Nick Knox of the Electric Eels/Cramps called the label to tell Norton owner Miriam Linna about the band. Initially, she didn't think they were quite right for Norton. But she subsequently met them when they performed at a private party at Franklin Castle, and the duo won her over.

"I thought they were great, and people were going nuts for them," Linna says when asked about what made her want to release the single. "It was a total gas. At the end of the night, Cullen was playing 'Whiter Shade of Pale' on a pump organ. Some people were passed out on the sofa and other people were leaving. He was playing that thing and then he began playing this other melody that was totally captivating. It was really haunted. They're really talented songwriters."

The vinyl version of the single even has the words "Franklin Castle magic" etched into the "dead wax."

At the Beachland show, local rockers Lords of the Highway will perform, and Knox will DJ alongside Linna.

Records, posters and T-shirts will be also available at concert, which marks Cullen O'Connor's 17th birthday.