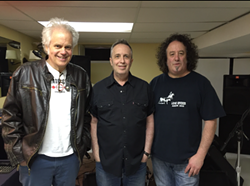 Some 35 years ago, John Teagle (Walking Clampetts, Vice Royals, Roy Loney) and Bruce Lipski started Red Rocket Gang to pay tribute to rockabilly legend Eddie Cochran who died that year. With the addition of Becky Armstrong and Mike Purkhiser (the Action), the group morphed into Johnnie Clampett & the Walkers. This weekend, the band celebrates its 35th anniversary with shows at Musica in Akron at 8:30 p.m. on Friday, April 15, and at the Beachland Ballroom at 9 p.m. on Saturday, April 16.

Teagle and Bob Basone (Wesley Brite & the Hi-Lites, Walking Clampetts, Human Tornados) also play in the guitar instrumental act Purple kniF, which shares the bill. And the show will mark the debut of Akron's She's Alright, She's Alright, a band that features veteran local musicians Jack Kidney (Numbers Band, Bo Diddley) and Butler. Kidney and Butler played together in the Numbers Band during the ’70s. They even played together in Kidney’s high school band, City Lights.

“I've been coming back once a month to rehearse with this band of borrowed musicians, who all enjoy the intensity of this project,” says Clampett.

Tickets to both shows are $10.