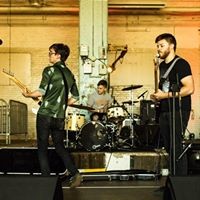 The local indie rock band Sweepyheads recently recorded a few brand new songs at Bad Racket Studios, and the guys from locally based Black Valve Media helped them shoot a music video for the Weezer-like tune “I Am Not Me.”

The music video stars members of the band along with friend James Kananen and his dog Dorothy "Frog Dog" Furface.

“The idea is that we illegally break into the studio to record a song in the middle of the night,” says singer-guitarist Andrew Yadon. “We thought it was funny because of the loud nature of recording a rock song. There's lots of overacting and funny moments; we had a great time shooting it. Everyone involved with the shoot are good friends of ours.”

You can see the video here.