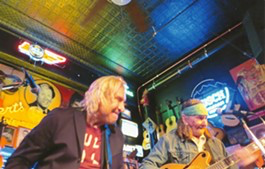 Bobby Southall
Joe Walsh (left) and Glenn Schwartz jamming in Nashville.
Local guitar hero Glenn Schwartz's band the Schwartz Brothers regularly played at the Beachland Ballroom and once held down a Thursday night gig for years at Hoopples, where he still played on occasion. Schwartz was the guitarist for the James Gang before Joe Walsh entered the band and took his place; Schwartz then left the group in 1967 and then joined the Los Angeles-based blues rock act Pacific Gas & Electric before embarking on his solo career.

"The Beachland lost a good friend today," reads a post on the club's site. "Glenn Schwartz left the earthly plane to complete his journey to be with his lord, as he told us was his mission so many times while playing on our stages. We have tried to give this Cleveland guitar legend a place to play for years. Others like Joe Walsh and Dan Auerbach have also reached out and admired Glenn's musical inspiration. And many Clevelanders have been loyal fans and supporters. We will keep you all posted about arrangements and will plan a musical celebration of Glenn's life at the Beachland on some future date."

Two years ago, Schwartz went to Nashville to work with Black Keys/the Arcs singer-guitarist Dan Auerbach and Walsh. Schwartz even played a surprise show with Walsh and Auerbach at Robert’s Western World, a honky tonk club in Nashville, alongside Auerbach’s side project, the Arcs. The group played a five-song set that lasted about 40 minutes and included Schwartz tunes such as "Fear & Doom" and "Wagon Wheel." Those songs have yet to be released, but we hope they see the light of day at some point.

You can find a tribute to Schwartz, a truly passionate musician and a tremendous talent, on his Facebook fan page.