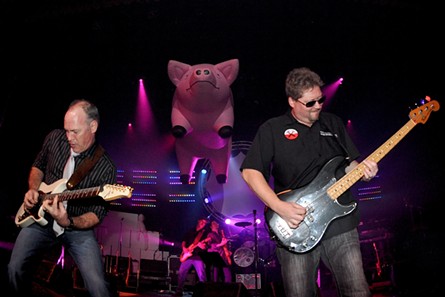 Joe Kleon
For a decade now, Wish You Were Here, the locally based Pink Floyd tribute act that started way the hell back in 1995, has put on a special holiday show at House of Blues. Usually, the guys adopt some kind of theme for the gig, and this year is no different. The band plays the club at 9 p.m. on Saturday, Jan. 3.

The band’s now entering its 20th year and Sosinski says the group will have a slew of special shows scheduled throughout the year.

“This is a big year for us,” he says. “This is our 20th anniversary year and we have shows planned for spring and summer. We’re waiting until spring to really kick off the 20th anniversary set of shows.”

Sosinski also says the band is contemplating adding some new songs to the repertoire since Floyd released a new album this year.

“I’m considering it but the problem is that there’s only one song that has vocals on it,” he says. “We couldn’t get to it in a rehearsal but we could have pulled it together if we had more time. When the album first came out, people have asked about whether we’d play anything from it. Personally, I love the album. If there’s enough of a warrant for it, we’ll try to put something from the album into the show.”