Texas guitarist Jon Dee Graham has finally made the album of his career. 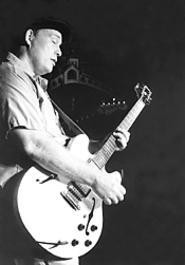 Jon Dee: A little off-center, just like he likes it.
Jon Dee Graham's résumé in Texas music over the past quarter-century is almost as wide as the state itself. He's fronted seminal punk bands, lent his accomplished guitar playing to artists as diverse as Michelle Shocked and John Doe, and, as a member of the True Believers, helped define alternative country. But it wasn't until two decades into his career that Graham finally struck out on his own and began issuing solo works, starting with Escape From Monster Island in 1997. Graham's most recent effort, Hooray for the Moon, is a minor revelation of dusky, intoxicating songcraft. An album this affecting prompts the obvious question: What took Graham so long to start putting out records of his own design?

"People have talked about it a lot, but no one's ever just asked me that question . . . thankfully," Graham says with a laugh from his Austin home. "You know what I think it was -- and it sounds so artisty, which I hate -- but I just don't think I was there yet. I had the songs, but it wasn't there. I reached a point when I moved back to Texas where the songs reached critical mass and my frustration with playing with other people reached critical mass. Suddenly, it was time, and I didn't have any choice in it."

It took decades to reach that critical mass. After an apprenticeship in church piano and country bass in the early '70s, Graham helped found the Skunks, a band that eventually became renowned as one of Texas's preeminent punk bands. In 1984, Graham took a giant leap into the spotlight when he joined the fledgling roots rock outfit True Believers. Led by the Escovedo brothers, the True Believers wowed audiences and made label reps drool like Pavlovian hounds. Unfortunately, their major-label debut in 1987 was underwhelming at retail, and the band was dropped before the second album could be released (it eventually came out on Rykodisc in 1994, as a twofer bundled with the first). With no label and internal relations becoming strained, the Believers broke up in 1989.

Graham moved to Los Angeles and started working the have-guitar-will-travel angle, as he did when he was between bands earlier in his career. He toured Europe with Austin eccentric Calvin Russell and made the rounds with Kelly Willis. He later played on Willis's career-making album What I Deserve and was featured on every Gourds record. Eventually, Graham's old pal and longtime musical sidekick Mike Hardwick talked him into doing some session work. An offer to record a live radio show led instead to the recording of Graham's solo debut. After the positive buzz of his first disc, Graham signed with New West Records and released his second solo album, Summerland, in 1999.

Without thinking very hard about it, Graham decided that he would just record his third album in much the same way that he had fashioned the first two -- lay it down in Austin, produce it with Hardwick, and be done with it.

"It was another case of me being proven completely wrong," says Graham. "I was saying, 'No, I don't want to go out of town to do this. I'm a family man, I've got kids, I'm very centered around my home life.' But Cameron [Strang] and Peter [Jesperson] at New West said, 'Well, we want to take you out of that, so that you're off-balance.' My take on that is that I'm plenty off-balance as is. I don't know if you could actually push me any further off-center than I already am. As it turns out, they were absolutely right. It stripped away every single thing that would have taken attention from me."

Working with an outside producer provided another surprise for Graham in the process of making Hooray for the Moon. He and Hardwick had twiddled the knobs on the first two solo albums, and they saw no reason to fine-tune the picture.

"The prevailing thought with me was that there's nothing in the studio that I can't do or figure out how to do," says Graham. "I fought the producer thing pretty heavily, and we went through four producers before we hit on Don Smith. That was a huge difference, actually having someone else to pull the trigger. So I fought it, until we actually got in there, and I discovered that my whole idea of 'There's nothing I don't understand about the studio' was completely wrong. He was just fantastic, and he had a huge impact on the way the record ended up sounding."

What it sounds like is the most consistent album of Graham's career. The disc is a brilliant blending of everything that Graham has ever touched or been touched by, moving seamlessly from the Latin rhythms that came to him by radio as a teenager to the punk-tinged rock of his early career to the rootsy rock of True Believers to the country-edged balladry that has defined his session work. The fact that Graham could successfully pull off this kind of sonic scrapbook is testament to the strength of his creative personality and the power of his songwriting in maintaining the thread throughout the album.

"We didn't set out to do that, and the fact that it came out that way is gratifying," says Graham. "It's funny, the first record we made out of spite, because I felt like I had to. The second record, we were pretty conscious about trying to balance the different styles and influences, which is hard, because a third of my gigs I play as an acoustic duo with Mike Hardwick, and the other two thirds are full-on Marshalls and drums, so it's hard to cover the bases. When we got to Hooray for the Moon, we didn't think about any of that. We just went, 'Okay, here are the songs. How can we best serve these songs?' As a result, the Latin comes through, the out-of-control, loud, enormously ugly stuff comes through, the pretty stuff comes through. We didn't set out to do that, and as such, it came out better than we could have charted it out. Like the best art, it was a happy accident."